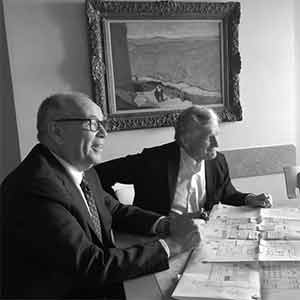 Thomas Faerber, CEO of historical jewelry maison Faerber Collection, and Ronny Totah, cofounder of antique and modern jewelry firm Horovitz & Totah, haven’t been thrilled with many of their experiences as trade show exhibitors in recent years.

As small, family-owned businesses, they’ve felt squeezed out of prime positions at fairs, left to languish in the poorly trafficked margins, while the booths of major jewelry and watch conglomerates increasingly dominate main spaces and grow in both size and flash.

Which is why the jewelry veterans are launching their own trade show: GemGenève, a showcase for strictly family-owned brands—antique jewelry dealers, gem merchants, and pearl specialists—that will debut at Geneva’s Palexpo venue May 10-13.

The show hopes to differentiate itself from other fairs in a few ways. For one, the inaugural event will be open to the trade and the public. And it’s notable that its organizers are also two of the planned 120 exhibitors (hailing from roughly 20 countries) at the event—which could shake out as an advantage, a liability, or a bit of both.

“The 120 people who are working with us, they are following us knowing we know absolutely nothing about how to organize,” says Faerber. “But they know we know what’s not working at other shows. It’s only because they know us that they have trust in us. We’re going to try not to make the same mistakes other shows do.”

Specifically, Faerber adds, “Normal show organizers, they fill all the booths and say, ‘Ah, the show is great! I did a great job, I sold everything!’ But if you keep looking just at this and not saying, ‘Am I doing enough for the exhibitors?’ you will have unhappy exhibitors.”

And the show won’t have any oversize booths. “It’s a fair for family companies and midsize companies,” Faerber says. “We will not have any dominant exhibitors. Our biggest booth is 60 square meters.”

Totah says, “We are not a big organizer who wants to do this just to make money. We are exhibitors in the show. So we don’t look to see if it costs more or not to do someting. We’re not trying to squeeze things to make maximum money.”

The organizers also hope to pump up the retailer experience at GemGenève. “Our express aim to is to find new retailers,” says Faerber. “We find in some of the shows, new retailers are becoming less visible. There are also fewer retailers than there were 20 years ago, and the big groups—companies like Richemont and LVMH—have taken over more retail space.”

The jewelers hope at least 1,000 retailers attend the show but say they would be extremely happy with 2,500–5,000 guests.

Top: Thomas Faerber and Ronny Totah in a photo from the GemGenève website