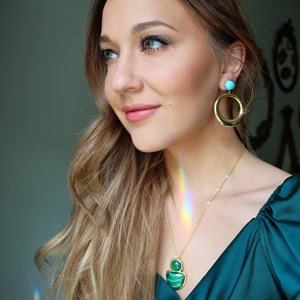 Jewelry influencer, social jewelry seller, and gemologist Danielle Miele—who’s more widely known as Gem Gossip for her beloved blog and Instagram feed—has been discussing jewelry for over a decade.

Miele’s been working on the collection with QVC’s stable of jewelry designers, based in Italy, for over a year now, but notes that the project almost didn’t happen.

“It was almost canceled so many times!” she says with a laugh. “There was the pandemic, but also the rising price of gold,” which prompted the company to suggest a non-fine collection. “But I was adamant that it be real gold and gems,” she says. “That’s my thing. That’s what I’m all about. I don’t do silver, I don’t do brass. Eventually it worked out.”

The collection is composed of over a dozen 10k gold styles, all of which incorporate gems Miele personally loves and often showcases on her Instagram, including tiger’s eye, agate, black onyx, malachite, and amethyst. Circle and oval forms, which have an early 1980s feel, are a throughline in the collection. Cabochon and dome-cut gemstones abound.

Prices for Gem Gossip rings, pendant necklaces, and earrings range from roughly $300 to $800.

The jewelry influencer was first approached by QVC via an email suggesting a collaboration. “I thought, is this even real?” Miele recalls. “I even did some research to make sure the person actually worked at QVC.” When she realized the offer was legit, her reaction quickly flipped to “hell, yeah.”

The design process entailed working with the company’s Italian jewelry team over Skype for many months, creating and perfecting each piece through back and forth. Miele notes that she loved her collaborators’ accents because they reminded her of her Milanese grandmother’s.

QVC typically relies on its designers to sell their collections live, and in pre-pandemic times, Miele would have been live on set to promote her line. Instead, she’s been live on video during segments.

Still, she did go through QVC’s famous presenter training. “It was fun,” she recalls. “I felt like I was on Shark Tank. You have 20 seconds to sell your collection. The woman I worked with was like, ‘You need to hone in on your sound bites and have three things about each piece you can talk about quickly.’ I’m so low-key, but that made sense to me. By the time I was done with the course, I was like [in an excited sales voice] ‘You’re gonna want this!’”

Miele says she’s bowled over by the fact that the collection actually happened, and with QVC. “It’s crazy how much QVC I watched growing up,” she notes. “It was all the time.”

She adds, “I started Gem Gossip because I wanted to talk about jewelry and didn’t have anyone to talk to about it. I honestly never thought something like this would happen.”

All photos courtesy of Gem Gossip