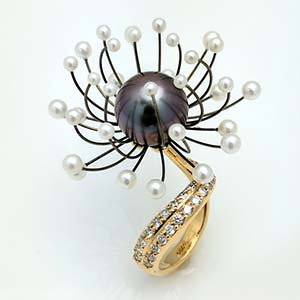 Jewelry that incorporates movement? Well, we’ve seen that before. But jewelry made from a metal that moves on its own? That’s definitely something new.

San Dimas, Calif., firm Galatea took on the challenge of creating a flower, using 14k gold and pearls, that actually blossoms in the heat.

Blossom Shape Memory Jewelry, the brand’s latest collection, centers on a design that opens and closes like the petals of a blossom when the temperature of its surroundings changes. So far the brand’s released one ring with the organic-feeling movement, but it will introduce additional ring and pendant styles in the coming months, according to a company statement.

So how exactly does the flower blossom? The design uses an old alloy called Nitinol that changes shape when heated or cooled. The metal, a 50-50 mixture of nickel and titanium, is frequently used in medicine and dentistry—but clearly not so common in jewelry.

In fact, the company claims this is the first time a jewelry company’s attempted to patent its use in a jewelry setting.

To see the ring in full-blooming action, check out this video.

Galatea has been innovating for a while now. The company, which was founded by Chi Huynh in 1994, describes its artistic and commercial mission as relying on pearls and gemstones that “have been transformed by proprietary and patented processes,” putting innovative techniques in service of collections that can be described as “unusual,” as well as beautiful.

In 2005, the company introduced the Galatea Pearl, a pearl that is cultured using a colored stone bead. After the pearl’s nacre is carved away, the color can be seen below its surface. And the company’s DavinChi Cut Collection introduced a new way of setting a gemstone in jewelry so it could absorb the colors of its surroundings.