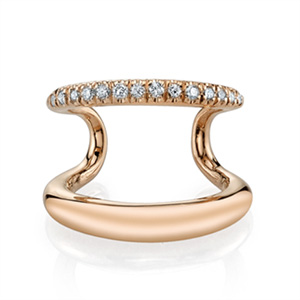 The Los Angeles–based company was founded in 2008 by Gabriela Artigas, the brand’s designer, and her sister, Tere Artigas, the company’s current director of sales.

The collection is well-known and beloved by many women who work in fashion and media in Los Angeles. The house’s signature design form—a tusk shape that Gabriela twists, bends, and makes round to create elegant, bohemian-feeling rings, necklaces, and bracelets—can be spotted on women from downtown L.A. to Malibu.

The Artigas sisters, who were born and raised in Mexico, relocated to Melrose Avenue from a nearby studio/showroom space after water damage to the building forced them to move, reports WWD (the owners were not available for comment for this article).

The 850-square-foot store was created in collaboration with Tatum Kendrick of Studio Hus, Hillary Taymour of fashion line Collina Strada, and the co-owners’ brother, Alex Artigas of Artless.

The shop’s interior design reflects the brand’s aesthetics—the tusk design can be seen in hangers and drawer pulls, and “a copper oval jewelry display, chromed metal and green marble tables and dramatic mirrored columns…represent the diamonds used in the collection,” according to WWD.

The brand’s complete women’s, men’s, and bridal collections are showcased in the boutique, which also boasts a private area for VIP appointments and consultations.

The Artigases celebrated the shop’s opening—and their company’s first decade in business—with an in-store party last week. The atelier’s latest collection, a cache of pieces that marry 14k yellow gold with white mother-of-pearl called Cosmos, was revealed at the event.

Gabriela told WWD that after 10 years in the game, she and Tere feel ready for retail and noted, “We’ve learned so much about our customer over the last decade that we felt confident enough to present our own space.”