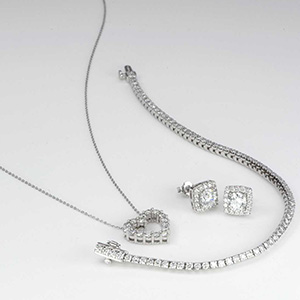 As part of the acquisition, founder and CEO Schneider will join Frederick Goldman as vice president of sales. Schneider is a former director of Stuller and CEO at Gregg Ruth/KGK Group.

Frederick Goldman CEO Jonathan Goldman says that the company is setting up a factory in Mexico to produce jewelry for the Love Earth brand.

“We want to make sure that we have tight control,” he says, to insure the lab-grown product will not mix with the natural.

Goldman says that his company has wanted to leap into the lab-grown industry for some time.

“It’s the fastest-growing business in the industry,” he says. “Obviously, there are going to be a lot of players.”

What attracted him to this brand—which uses the tagline “an inspired choice”—is that he thinks Schneider has built a “nice offering” for his customers, which includes both bridal and fashion.

Goldman hopes to make Love Earth distinct by leveraging the company’s fast delivery capabilities and its skill in making custom product. “We have the ability to make the high-quality custom pieces,” Goldman says.

It doesn’t plan to buy from any one grower but to purchase lab-grown product from its office in India from the “best value providers.”

The company hasn’t decided how Love Earth, which had previously been pitched to independent jewelers, will be sold, but it is looking at major accounts.

Frederick Goldman, of course, has plenty of natural diamond inventory. Jonathan Goldman isn’t sure how it will be affected.

“It will clearly cannibalize some of the natural industry,” he says. “But what you hope is that this will make the entire industry grow by offering something new and different and getting millennials into the store.”