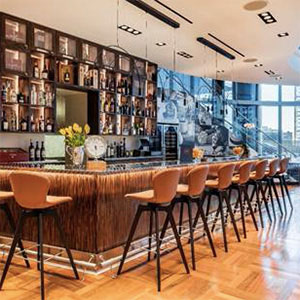 The space centers on Bar Journe, a 10-seat bar specializing in fine and rare spirits. Open to the public, the bar was created in partnership with caviar maker Petrossian (Jamón Ibérico and Petrossian caviar are served) and family-owned Spanish yacht builder Astilleros Astondoa, which furnished an outdoor cigar lounge where watch lovers can smoke fine and rare cigars from a perch that offers expansive views of the Miami River.

There are watches, too—displayed in a circle of custom-made glass vitrines. But selling timepieces is incidental here. The gathering space is all about branding and raising the profile of the Swiss atelier and its partners. There aren’t even traditional sales associates, though guests can technically purchase the watches.

“It’s a space where people are passionate and the sales are more an afterthought,” Pierre Halimi, North American president of F.P. Journe, tells JCK. “Nothing better than to meet passionate people.”

Rarity is a through line. Guests can make reservations at the bar through the digital Tock platform for “an immersive experience” and access to a cabinet of valuable spirits that includes Suntory Japanese whisky from the 1980s, Bacardi rum from the 1940s, 1968 Jose Cuervo tequila, and circa-1970s Moskovskaya vodka.

F.P. Journe was founded by French-born watchmaker François-Paul Journe, who began creating his first tourbillon pocket watch when he was just 20 years old. The atelier makes its mechanical watches one by one and in small series, releasing fewer than 1,000 watches per year.