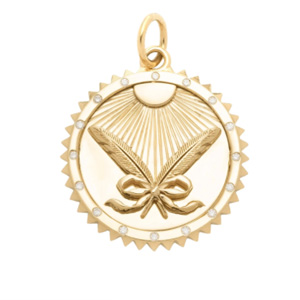 From now through the end of the year, the jewelers will donate 100% of the retail proceeds from the new All Rise medallion to St. Anne’s, an organization that provides high-quality housing, workforce development, early childhood education centers, and mental health services to young pregnant women and mothers—who are primarily BIPOC —in the Los Angeles area.

The 18k yellow gold medallion, which is wreathed in pavé diamonds, features two feathers, crossed and tied by a ribbon, under a radiant sun. “Feathers are instruments of flight and ascendance, and the ribbon represents that we are tied to each other by a golden thread that links us, bound together as a community,” reads the jewel’s description. “We must tie the individual struggle to the collective struggle. One person’s burden becomes lighter as more people hold it up. All rise.”

The jewelry companies join a stable of industry players who’ve been visible in their support of racial equality, no doubt spurred by the tragic murders of George Floyd and Breonna Taylor this past summer and inspired by the Black Lives Matter movement.

Harwell Godfrey designer Lauren Harwell Godfrey has raised over $100,000 for the NAACP from the sale of her Black Onyx Heart pendant, which she created specifically as a fundraising piece. Jewelry designer Alexa Sidaris, along with jewelry retailer Reservoir, raised funds for the anti–police violence organization Campaign Zero by donating 100% of proceeds from a ring that reads “Unite the Fight.” And jewelry designer Maya Brenner partnered with Nyakio Beauty founder Nyakio Grieco on a collection from which they’re sending 50% of all proceeds to the nonprofits Color of Change, Girls Inc. of Los Angeles, and I Am a Voter. And that’s just to name a few.

The medallion sells exclusively on Foundrae.com and through Broken English, and retails for $2,650.

The Oct. 15 launch was supported by a few celebrity friends: Gabrielle Union, Dwyane Wade, Cynthia Erivo, and Olivia Wilde, who posted a photo of herself in the All Rise medallion on Instagram, tagging St. Anne’s, Foundrae, and Broken English.