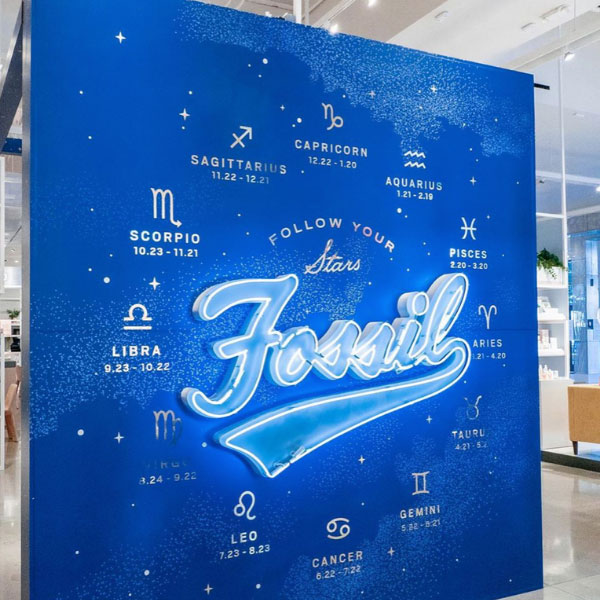 In September, JCK’s Rob Bates posited, “Is Neighborhood Goods the department store of the future?” in the opening paragraph of that week’s Diamond Shavings column. In it, he links to a CNBC article about the Plano, Texas–based retailer’s unique format and recent funding windfall (to the tune of $11 million).

Cofounded in 2017 by Matt Alexander and Mark Masinter, Neighborhood Goods is focused on offering a carefully curated network of emerging and established brands a platform for selling their collections on a rotating basis, often with a compelling activation or experiential element consumers would not be able to access elsewhere.

That the Fossil Group is based in Richardson, Texas, presented a unique collaboration opportunity.

“We started chatting with Fossil in the summer of 2018, several months before opening our first location,” says Matt Alexander, cofounder and CEO of Neighborhood Goods. “As a local—and incredibly creative—brand, Fossil had been contemplating more pop-ups and playful concepts to show off their products, and, with us opening just up the road, it became a mutually interesting conversation to experiment with those ideas.”

The partnership kicked off in earnest in August with a Fossil pop-up; subsequent installments centered on other Fossil-owned brands such as Skagen and Diesel.

“We had not featured watches prior to launching Fossil,” says Alexander. “We’ll continue to experiment with all manner of new categories over time.”

That said, the latest Fossil pop-up in Plano is primarily focused on the new, and very holiday-apropos, Modern and Magic jewelry collection. The assortment features a variety of meaningful motifs and symbols for luck, love, grounding, strength, and balance.

“On a personal note, I love testing things that are experimental,” says Steve Evans, executive vice president of Fossil Group. “The future of retail is absolutely about creating cool partnerships, and Neighborhood Goods is the quintessential example of cool partnerships. [It’s] such an exciting first for us to…get new and existing customers excited about the most interesting trends happening right now in watches.”

Next week, Neighborhood Goods itself will be “popping up” in New York City—a new location is opening in Chelsea Market—and a Fossil pop-up will likewise be a feature of the store’s Big Apple debut.

“We’re interested in working with all manner of brands—direct-to-consumer startups all the way up to massive international companies—as long as they have the willingness and inclination to do something interesting in our space,” says Alexander.

Top: The Fossil pop-up at Neighborhood Goods in Plano, Texas, will be shoppable through Dec. 31 (image via: @neighborhoodgoods).