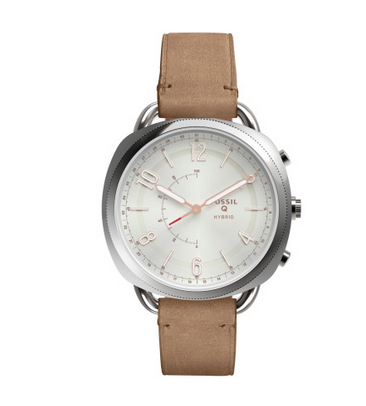 Smartwatches from Skagen and Misfit debuted yesterday at CES

Fossil Group, one of the world’s most prolific wearable developers, announced yesterday that it plans to release over a hundred new wearables this year—under a variety of brand licenses—to reach a new high of 300 Fossil Inc.–made wearables by the end of 2017.

The brand made the announcement in the midst of the annual Consumer Electronics Show (CES), which is currently being held in Las Vegas through Jan. 8.

Fossil is already off to a running start—its brands debuted a handful of new devices at the tech show, including the Fossil Q Accomplice, a handsome, hybrid watch with a remarkably slim case; the Skagen Jorn and Hald smartwatches (both minimalist, also with superslim cases); and the Misfit Vapor, the brand’s first touchscreen smartwatch, featuring heart rate, GPS, and stand-alone music functionality.

It’s nice to see that Fossil—at least with these new releases—is continuing its trajectory of pairing good design with cutting-edge tech. The presence of both is still a rarity in the wearable world.

“Customers crave connectivity that doesn’t compromise style,” said Greg McKelvey, chief strategy and digital officer for Fossil Group, in a company statement. “The success of our hybrid smartwatches has proven that our consumers want a balance of function and fashion.”

A year ago, the company claimed it would release 100 new wearables in 2016. It ended up launching more than 140 wearables across a variety of high-profile brands, including Chaps, Diesel, Emporio Armani, Fossil, Kate Spade New York, Michael Kors, Misfit, and Skagen.