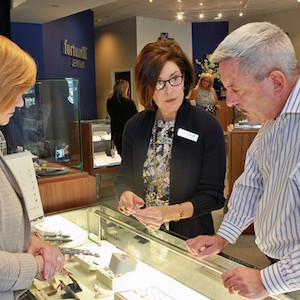 Following the second filing, the Fortunoff name was purchased by Esther and her brother David, who is no longer actively involved in the business. The relaunched company sold mostly via a Fortunoffjewelry.com website. In 2014, it opened the Westbury store. And while that store has done well, the company will focus on online going forward, Esther says.

“People said they wanted to touch and feel jewelry,” she says. “I’ve had the boutique for six years. But now is not really the time for that. The world has changed. Either customers don’t want to come in, or they have studied the website and don’t necessarily need to be in the store.”

Some of these changes were brought on by the COVID-19 pandemic, but Esther says the world was starting to change before that.

“Younger people are fine with online,” she says. “There’s a whole generational shift. The baby boomers aren’t spending so much money. They are gifting the jewelry to their kids.”

She hopes stepping back from the retail store will allow her to focus on the website.

“Keeping a brick-and-mortar store open and operating is a full-time job,” she says. “I have a wonderful staff, but customers really wanted to see me in person and I was devoting a lot of time to it. It stopped me from being able to explore new designers, plus travel was a bit restricted.”

She plans to beef up the website, with more interactive features and 360-degree photography. It’s also possible she might experiment with pop-up stores in New York, New Jersey, and Connecticut.

“Fortunoff was really a tristate name,” she says.

And it’s not out of the question that Fortunoff might try brick-and-mortar again.

“Brick-and-mortar has changed so much, but I love being in a store and interacting with customers. That was fun for me, and it’s still fun to show people product and have them say, ‘Wow. That’s a really beautiful ruby.’ I just have to look for the right fit and the right way to do it.”

Top: A picture of the Fortunoff store, with Esther Fortunoff in the middle (image courtesy of Fortunoff Fine Jewelry)