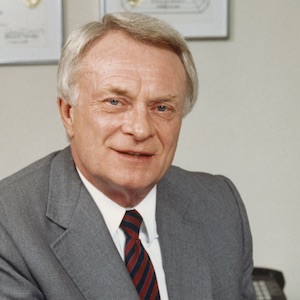 Glenn Nord (pictured), who served as president of the Gemological Institute of America (GIA) from 1983 to 1986 and is widely credited with nursing the then-ailing institution back to financial health, died June 9. He was 90.

After completing military service, Nord studied at GIA as a watchmaker and jeweler, earning his Graduate Gemologist diploma in 1959. He made enough of an impression that president Richard T. Liddicoat selected him to join GIA’s staff in 1961. He eventually rose to become GIA’s number-two person on the West Coast and was a right-hand man to Liddicoat.

By 1974, he was diagnosed with a brain aneurism. Hoping to secure his family finances should anything happen to him, he left GIA to become vice president of the International Goldfinger Group, then a leading diamond company. He retired in 1981 and joined GIA’s board of governors two years later.

According to Legacy of Leadership, a history of GIA written by former JCK editor William George Shuster, in 1983, as GIA was reeling from the after-effects of the 1980s investment crash, Liddicoat had a heart attack, forcing the legendary workaholic to relinquish the GIA reins after 13 years as its head. The board of governors had to suddenly search for a successor.

The entire board of governors thought elevating Nord to become president was a great idea—except for Nord, who still had health issues and told his fellow governors he didn’t want to do it.

After much prodding, he reluctantly agreed to be acting president for six months. He made it clear early on that he considered the position temporary—so much so that he didn’t take over Liddicoat’s old space, but stationed himself in a leased office across the street.

He soon realized that, like the wider diamond market, the GIA’s financial health was fragile. He instituted a series of steep and sometimes painful cuts, and its staff shrank from more than 500 to 275 within six months.

His “no-nonsense approach, and the decisive actions he took, quickly earned him a reputation among many in the industry as a tough businessman,” Shuster wrote.

But, even if it was not always apparent, Nord found what he was doing difficult. “I couldn’t sleep many nights,” he later told Shuster, “knowing I would have to let someone go the next day who was a good employee. I knew it hurt people, good people.”

He was also sensitive to staff morale and made a point of informing his employees of what was happening. He took daily walks around the campus to stay visible and pick the brains of the rank and file.

By January 1984, GIA was on firmer footing, and as the originally scheduled end of his tenure approached, Nord was appointed permanent president. He invested in several key areas that would soon grow in importance for GIA, including its financial aid program, its educational GemFest, and global expansion.

Nord put in long hours at the job and worried about the toll the position was taking on his health. In 1986, following a seizure at a De Beers’ Carat Club meeting, his doctor warned him to slow down, and he resigned—though this time with more mixed feelings.

“People who haven’t worked for the Institute don’t understand what I’m talking about, but there’s no place like GIA,” he said. “So yes, I feel bad about leaving it again.”

Handpicked successor Bill Boyajian was named GIA president and held that role for the next two decades.

Nord remained on GIA’s board of the governors, and in 2003, he was elected governor for life. His brain aneurism was safely removed in the 1990s, according to Legacy of Leadership.

GIA president and chief executive officer Susan Jacques says Nord “was part of the great generation of GIA leaders that included Richard T. Liddicoat, G. Robert Crowningshield, Bert Krashes, and Eunice Miles. With them, Glenn laid the foundation upon which GIA is built. An unwavering supporter of our mission, his wisdom and guidance will be missed.”

Remembers Boyajian: “GIA meant everything to Glenn. He was a giant at the Institute.

“He was indeed a tough businessman, but he had a very soft heart, even to the point of getting emotional at times during what were very difficult years. Glenn did what had to be done, as all great leaders do. I think he was underappreciated for what was a very dark time in GIA’s history, with the cuts that had to be made to ensure that the Institute would survive.…  I owe a lot to Glenn, and so does GIA.”

George Kaplan, the former chair of GIA’s board of governors who worked with Nord, told Shuster that Nord “saved the Institute, and if it weren’t for him, it wouldn’t be the institution it has become.”

Nord is survived by his wife, Hanna, daughters Robin and Jan, and son Rick, and numerous grandchildren and greatgrandchildren.