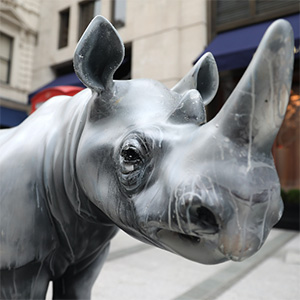 The installation will be scattered throughout central London, in the form of 21 corporate-sponsored rhino sculptures decorated and or embellished by a collection of internationally lauded artists.

Forevermark is sponsoring one of the 21 and tapped contemporary British artist Dave White to paint it. The resulting piece, entitled Fragile, “represents the fragile balance of order and chaos in the natural world and the impact that we are having on our environment,” said White in a statement. “I hope that by inspiring generations of all ages with this project, it will be one small, positive step to support Tusk in their vital work protecting endangered species.”

The sculptures debuted Aug. 22 and will be on display through Sept. 22 (which is World Rhino Day!) at a smattering of iconic London sites including New Bond Street, Trafalgar Square, Covent Garden, and Carnaby Street. They will go up for auction on Oct. 9 at an event hosted by auction house Christie’s.

De Beers Group has been active in rhino conservation for many years, sponsoring breeding and relocation programs. Projects implemented by Debswana, a De Beers joint venture with the government of Botswana, support Botswana’s white rhino population through initiatives that conserve and grow the population before releasing individual rhinos back into the wild.

Costantino Papadimitriou, chief marketing officer at Forevermark said in the statement, “We’re proud to partner with Tusk and Dave White on the Tusk Rhino Trail. The emotional and realistic sensation that White has created with his design perfectly captures the fragility of the rhino’s survival and just how important it is, for each and every one of us, to proactively be a part of protecting one of nature’s treasures.”

Top: The rhino sponsored by Forevermark painted by Dave White (courtesy of Forevermark)