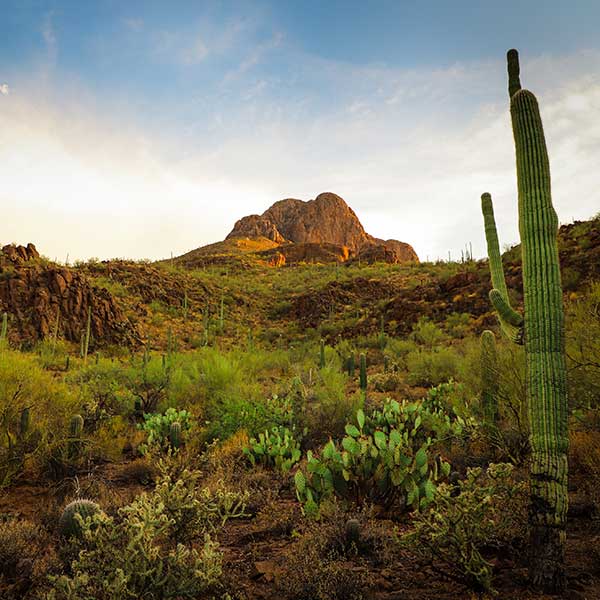 To anyone with a stake in the colored stone business, “Tucson” is shorthand for the confluence of 30-something gem shows that take place in the Arizona city every February. While newcomers may find it difficult to decide which shows are worth their time (and money), the American Gem Trade Association GemFair deserves a place on every buyer’s itinerary. Since its debut in 1982, the show, which moved from its original location at the DoubleTree Hotel to its current location at the convention center in 1992, has been the premier event on the Tucson Gem Show calendar.

AGTA chief executive officer Doug Hucker has watched the show grow from a ramshackle affair into the grand old dame of Tucson’s thriving gem scene. Nearly four decades after the GemFair was founded, he looks back at what’s changed and what hasn’t—and offers newbies a few priceless tips on how to make the most of their time in the city.

“People always say to me, ‘You must get really stressed when you go to the show.’ But it’s a fact: When I go to Tucson, my blood pressure goes down,” Hucker says. “I know it’s going to be fun. Tucson is a magical place.”

The first GemFair was at a time when Tucson was not hugely on the map. The folks that started AGTA were kind of scattered around the different shows around town. It was one of those seminal moments—people were young, traveling the world, and buying gemstones. They really didn’t know what they were doing, but they had enough experience to start a show. It was small, they didn’t have any money, booths were $400–$500 apiece. They hired a local Tucson cop as the security guy—his name is Skip—and he’s been with us since day one.

What’s the biggest difference between then and now?

When we first started out, in the ’80s, that was when colored gemstones were really emerging. Retailers were savvy, but there was nowhere near the awareness there is now. If you walked into the show today or 20 years ago, you’d see the same people, the same little intimate, comfortable show. What has really evolved is the importance of the show to the industry because of the importance of colored gemstones.

You’ve also watched Tucson grow as a city. How would you describe that evolution?

The city has definitely become more sophisticated. The restaurant scene is volatile, but about 10 years ago you started to see the emergence of hip chefs. It was given the title of UNESCO City of Gastronomy; they designate that based on the use and variety of local foods. It’s a very rich cultural city but has always been kind of run down. Now you see a lot of development; they’re building hotels downtown. The university adds a lot of character to the city. But it’s still a small town. I just love it.

What are your best dining tips for newcomers?

El Charro is a must, must, must. It’s a Mexican restaurant and they have the best posole in the universe! Carlotta took it off the menu, but she brings it back during Tucson because I forced her to.

My favorite place to go to dinner and experience the warm, wonderful view from the mountains is Hacienda del Sol. It’s one of those resort hotels built for the Hollywood crowd to come and dry out. I’d give the restaurant a seven, but the wine cellar I’d give an 11. The courtyard is to die for. You’re looking right at the Catalina Mountains.

What do you recommend for people who’ve never been to Tucson?

I say get up Sunday morning, go down to San Xavier del Bac, a Spanish mission and Catholic Church built in the 1700s. It is just magnificent. Mary Lou and I go there every Sunday to pray for sales. They serve fry bread—don’t even think about the calories. It’s like a big tortilla and they put it in lard. You can have it either sweet with cinnamon or with chile. And it’s one of my favorite meals to eat—the Sunday morning fry bread the Tohono Indians make.

Then I’d come back and spend a little time at the show. Just before sunset, give yourself half an hour, jump in your car, go up Speedway into the mountains toward Old Tucson, and in maybe 20 minutes you’ll be at Gates Pass. There’s a scenic turnoff—it’s where you can see one of the most beautiful sunsets in the world.