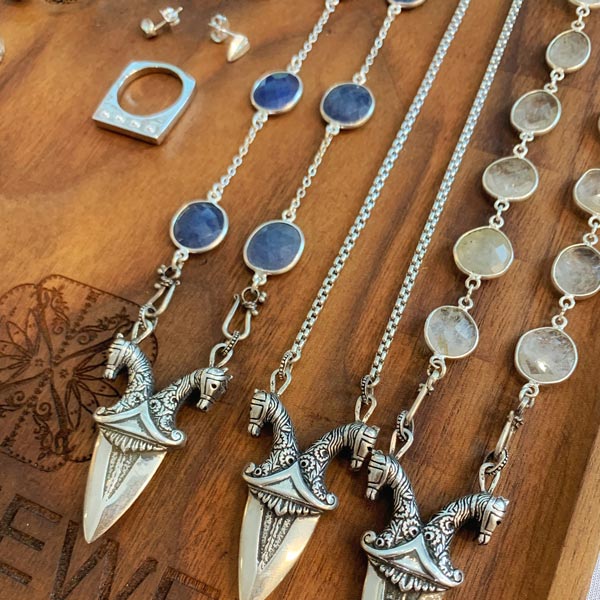 I’ve often wished to live in New York—or Los Angeles—where it seems like all the jewelry events happen. I can appreciate watching it all happen via social media, but after a while I start to feel left out. There really is only so much vicarious living a person can do.

So this past weekend, I got a taste of what it was like to have a jewelry event in my neighborhood—literally one block away. And—no surprise—I enjoyed my time very much.

A pop-up event put on by Finery Row, this consumer-facing show brought together 25 designers from various locations. The idea behind Finery Row is that it’s a “traveling jewelry show,” seeking to reach shoppers in different locations (aside from the aforementioned, oft-visited New York and L.A., though the show is coming to NYC in December).

I can’t speak for the consumer side of things, but as a member of the press (and just a general fan of jewelry), I enjoyed the opportunity to meet a good amount of designers I never had before, and catch up with some old friends too. Brands and designers I wasn’t previously familiar with included Nadine Aysoy, Button Box Design, and Benadon. I was thrilled to see the goods from Ri Noor and Bhojwani, and I also got to visit with Kaura Designs, Amy Glaswand, and Julie Lamb—designers who have, over the years, been behind some of my favorite jewels I’ve written about. Major props to Julie Lamb for sending me an invitation to the show via Instagram.

Where I think the traveling jewelry show—or any sort of trunk show concept—wins is in its ability to go places that larger events simply can’t. These are still relatively large cities, mind you—Austin, Atlanta, Philadelphia, and the like—but different from where the big shows typically take place.

What this concept doesn’t have on its side, though, is predictability, and in turn, must rely heavily on marketing and word-of-mouth. This isn’t an annual jewelry event that everyone attends on the regular—this is small, new, and still making its name on the show circuit. Plus, it’s not dedicated solely to the trade—quite the opposite, as it seeks to connect consumers with these designers.

And that’s important. Sure, shoppers can go to retail stores and find some of these designers’ pieces. But they won’t find all of them, and I think the key here is that customers can actually meet the people creating their jewelry. Who better to tell their own stories—to share their inspiration, offer anecdotes, and see firsthand the customer reaction—than the designers themselves? In the same vein, how better to be sold on a piece of jewelry than by the person who crafted it? Many of us are striving to put our money into purchases that we can fully understand: We know where it came from, what its influence has been. That’s not always possible, but in this venue, it’s a little bit easier.

So I hope that Finery Row will once again return to D.C. next year, because having a bevy of jewelry delivered—almost quite literally—to my doorstep was the best thing I could have asked for on the final summer weekend of the year.

Top: Horse pendants from the Balance collection of Kaura Jewels