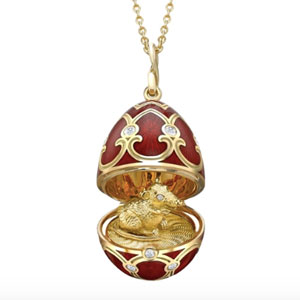 The Chinese New Year on Jan. 25 will usher in the Year of the Rat. Which is why at least one jeweler has chosen to regale the industrious rodent, which is a symbol of wealth, fertility, resourcefulness, and kindness in the Chinese zodiac.

Iconic Russian jeweler Fabergé has released a new locket in its series of Palais Tsarskoye Selo red lockets that, when opened, reveals a rat inside. The locket—called the Palais Tsarskoye Selo red locket with Rat Surprise—features red guilloche enamel and 15 round brilliant diamonds set in 18k yellow gold. The egg-shape locket opens to reveal the (very cute) solid 18k gold rat, which has diamonds for eyes!

The rat is the first sign in the Chinese zodiac. The legend goes that the Jade Emperor decreed that the sequence of the zodiac signs would be decided by the order in which the animals arrived at his party—and the rat tricked the ox into letting him ride on his back across the river, then he jumped down when they were almost there to cross the finish line ahead of the ox. Resourceful!

It’s been more than 100 years since Fabergé’s first creations for the Chinese New Year. Master craftsman François Birbaum was commissioned by the royal court of Siam to make a series of objets and trinkets for the Year of the Pig in 1911. In 2016, Fabergé revived the tradition for Year of the Monkey and later introduced lockets with the rooster, dog, and pig. In 2020 it will complete its Chinese zodiac collection, with the creation of lockets featuring the horse, snake, rabbit, ox, goat, dragon, and tiger.

The new Palais Tsarskoye Selo red locket with Rat Surprise retails for $9,500 and is available for pre-order at Fabergé.com.