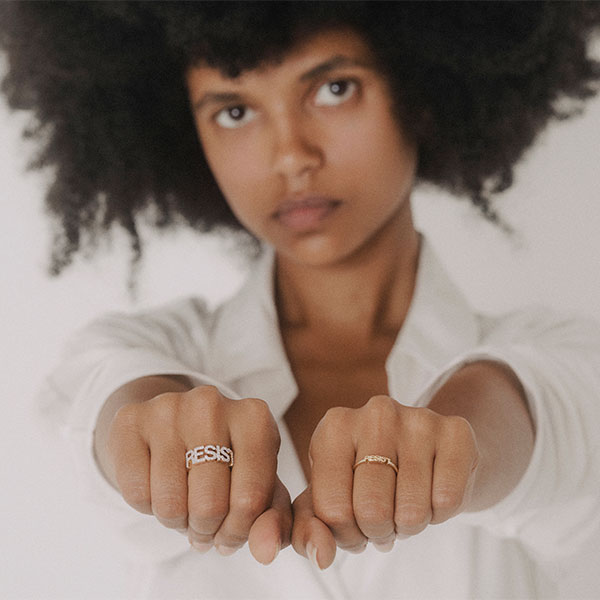 It seems we are—Erin Sachse, founder of the Los Angeles–based fine jewelry brand Eriness, reports that sales of her Resist collection are going strong.

Originally launched in 2016 as a response to the election of Donald Trump as president, Resist was a runaway success, allowing Sachse and her fans and followers to see how jewelry—and the power of a single word—can represent something beyond aesthetics and adornment. Especially since 20% of proceeds were donated to Planned Parenthood. In fact, the collection launch raised $25,000 for the organization.

Resist sales have remained consistent—“because there is a lot we need to be resisting,” says the designer—and sales rose again last October when Eriness relaunched the collection and expanded the donation beneficiaries to include the ACLU and Color of Change in addition to Planned Parenthood.

“Within the past year, the mindset of shoppers has changed as the importance to purchase items that give back to charities has increased,” says Sachse. “Additionally, consumers purchase items that are meaningful and serve as talismans. [I think] customers will continue to purchase Resist as a means to give back, as a way to represent past achievements and milestones, and to provide hope and power to battle future obstacles.

“ ‘Resist’ is a powerful tool, a word that captures the urgency and importance to stand up for what is right.”

It’s also a call to action, even now—there is as much hope as there is strife and consternation. It’s a reminder not to remain complacent. I’m struck by this line from a recent article by the acclaimed writer, social historian, and activist Rebecca Solnit: “Now is an excellent time to stand on principle and defend what we value, and I believe it’s a winning strategy too, or at least brings us closer to winning than surrender does.”

Especially if our jewelry purchases can likewise get us closer to vanquishing the voices in the madding crowd.