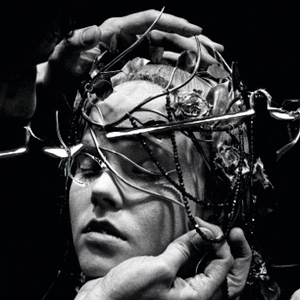 British jewelry designer Shaun Leane is perhaps most famous for his collaborations with fashion designer Alexander McQueen. The full-body metal pieces—metal clothes, really—and bold, artful adornments he dreamed up and made for the late designer were groundbreaking and make most of today’s stabs at using jewelry on the runway look anemic in comparison. (But then, how many collections are suited to chain mail and crowns of thorns?)

A new book about Leane’s his work, to be published by ACC Art Books in July, includes reflections on Leane’s work and friendship with McQueen, one of fashion design’s great storytellers and envelope pushers, through memoir and never-before-seen backstage photos taken by Leane’s close friend Ann Ray.

Leane began working with McQueen in the early 1990s: His first contribution was a series of Victorian-style silver fob watch chains he made while at university, which were included in McQueen’s theatrical runway show “Highland Rape.” He soon became a full-time collaborator, working eight shows a year for McQueen and Givenchy, which McQueen was leading at the time. The darkly romantic, always historically inspired pieces he created—including the spine skeleton corset and a metal mouthpiece for McQueen’s “Repression” show—are now legendary and have been displayed as part of McQueen museum retrospectives.

The book, simply titled Shaun Leane, is sectioned into three distinct parts, with a different writer authoring each.

The first part, written by gemologist and jewelry industry consultant Joanna Hardy, covers Leane’s training. The second, authored by Claire Wilcox—the senior curator of fashion at the Victoria and Albert Museum—details his time with McQueen. And the third part is penned by jewelry writer, historian, and journalist Vivienne Becker, who tackles the jewelry designer’s commercial jewelry life. (Leane has produced a commercial line since 1999 and has won the UK Jewellery Designer of the Year Award four times.)

Packed with photos, the book is a beautiful ode to one of jewelry’s most creative and nonconforming talents, who—through his most memorable collaboration—was given the opportunity to stretch his creativity and design mind to incredible lengths.