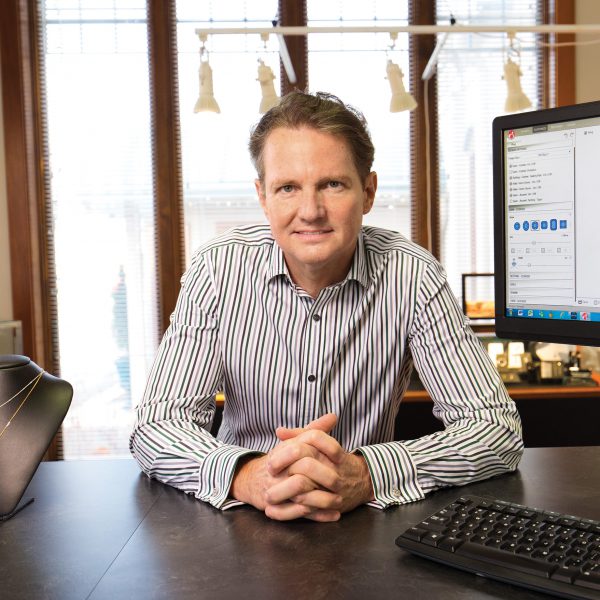 What makes your store competitive with the other jewelers in your area?

I think our unique store proposition would be the focus on creating exactly what’s in our customers’ imaginations. The client is the driver. We’re branded as Warren Jewellers, but we’re selling their product. We started with 3-D right around when Stuller introduced it, and Stuller tells us we’re No. 2 in the country for our percentage of 3-D–printed engagement ring orders.

Can you describe a time when you or someone in your store went above and beyond for a customer?

One of my employees was in traffic, and in front of her was a vehicle that had a magnetic bumper sticker showing the name and logo, which included a ballet slipper, of a local dance studio. She knew the owners of the studio were good clients. So she [called] the husband with an idea—to make the ballet slipper in 3-D with diamonds as a gift for his wife. He went for it…and later came back and bought matching earrings.

What one advertisement or promotion has elicited the biggest response, and why do you think it worked?

We just hosted an event for our 40th anniversary and it was awesome. We hired a branding consultant recently, and she’s been doing the coordination of everything and pulling all the elements of the business together. The event worked! We had around 100 people at the event and we sold 80 percent of the people who came. We offered a 15 percent discount, which was not huge but something, and [promoted] on social media and also through brochure cards planted around the community. It was a profitable event and it wasn’t expensive for us at all.

What has been your biggest challenge, and how have you resolved it?

I think the biggest challenge is doing business with the realization that the multibrand jeweler model—the one we grew up with—is dead. That all went away in the third quarter of 2008. Today [success relies on] being able to combine technology with the understanding that it’s the customer who’s driving your brand. It’s been important to tune out the noise and focus on the client and not be naïve. Don’t hold on to the old ways of the independent jewelry model. Recognize that that’s gone.

What is the secret to your long-standing success?

Adaptation. I was robbed in the 1980s without any insurance. I lost everything and I knew it that day. The FBI was dusting for fingerprints and police were standing around when a couple walked into the store wanting an engagement ring. They were so in love and distracted, they didn’t even notice it was a crime scene. I was able to pull myself together and talk them into coming in the next day to see rings I had in my second store. They came back and I had three rings to show them, total. They bought one. To be able to grab your brain cells together at any moment and be present and relevant for a client—that really is the mentality you need.
Photograph by Michael Branscom