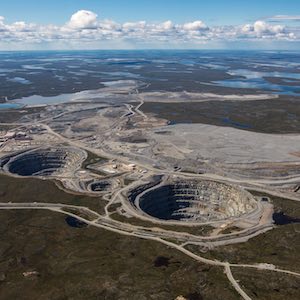 The two second-lien lenders agreed to provide Dominion with a $70 million working capital facility and to assume Ekati’s liabilities to creditors, employees, suppliers, and surety bondholders.

Dominion, which owns both Ekati and 40% of the nearby Diavik mine, filed for insolvency protection in Alberta in April. Its share of the Diavik mine was not included in the deal, which requires court approval.

The new bondholder-controlled company intends to keep Ekati open, with operations due to restart by Jan. 29, 2021, according to an affidavit from Dominion independent director Brendan Bell. Ekati has been on care and maintenance since March, because of the COVID-19 pandemic.

In November, Dominion announced it would recall 60 furloughed Ekati employees to prepare for a planned restart. The move followed an agreement with creditors to restructure the company.

Bell said that the importance of the mine’s continuing operation to the Northwest Territories “cannot be overstated,” as it’s the area’s second-largest nongovernmental employer. But because of the complex nature of operating the mine and “downward pressure on diamond prices,” there is only a limited number of possible purchasers, he said.

Earlier this year, an affiliate of Washington Companies, which owned Dominion prior to its bankruptcy filing, submitted a stalking horse bid to repurchase its assets for $126 million. However, that bid fell apart when insurers balked. DDJ, one of the new owners, also expressed doubt about the sale at the time.

Ekati is Canada’s oldest diamond mine; it began production in 1998, and is generally credited with sparking the Northwest Territories’ “diamond rush.” Current projections say the mine will continue to operate until 2034, though the Fox Deep project could extend its life to 2042.

Top: An ariel view of Ekati mine (photo courtesy of Dominion Diamond Corp.)