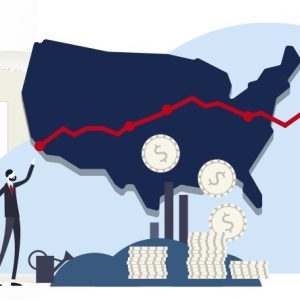 The generally good economic times are not affecting all parts of the country equally, with Northeastern states enjoying the best economies, and the South and the Midwest not keeping pace, according to a new study on each state’s “economic health” conducted by website Senior Living.

Virginia is the sole Southern state to make the top 10.

The survey developed its economic health rankings using publicly available data on unemployment, wages, and gross domestic product from the U.S. Bureau of Labor Statistics and Bureau of Economic Analysis.

Of the four U.S. regions—the West, Midwest, South, and the Northeast—the South and the Midwest had the lowest average score, while the Northeast had the highest.

This mixed picture is showing up in polling data. A December Gallup survey found that 18% of Americans thought that the economy was in excellent shape, 37% rated it good, 30% felt it was fair, and 12% rated it poor.

“What’s true for the economic and fiscal health of one state definitely isn’t true for all of them,” the survey concluded. “In many states, wages, employment, and total economic production aren’t improving as quickly as in others. The question of how healthy the economy is definitely depends on your point of view.”

The study also found that Vermont had the lowest unemployment rate (2.3%), while Washington, D.C., had the highest annual median wage ($87,920). California has the highest gross domestic product—nearly $3 trillion.

You can see how your state fared on the economic health index here.

(All images courtesy of Senior Living)