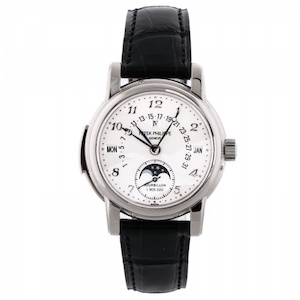 A Patek Philippe Grand Complications watch has topped eBay’s list of the most expensive watches sold on the auction site this year.

The Patek Philippe (pictured, left) sold for $535,499.99, which not only makes it the most expensive watch sold on eBay this year, but also the second most expensive item sold on the site overall.

The priciest item also has an industry connection: It was a lunch with Berkshire Hathaway chairman Warren Buffett, which sold for $3.3 million, with proceeds donated to the Glide Foundation, a charity that aids homeless people in San Francisco. The Nebraska billionaire has offered the lunch for 18 years.

One jewelry-related item made it to the site’s list of most-expensive pieces: “Splendour of the East,” a work of “gold art” designed by Ralph Togel. EBay lists it as selling for $200,000, though the final auction price says $299,000. It ranked 16th.

The second most expensive watch sold this year was a Richard Mille RM11 Flyback Chronograph in rose gold and titanium, which went for $148,000. That was the 19th most expensive item sold on the site this year.

The third most expensive timepiece sold on eBay this year, which didn’t make the list of top 20 most expensive items, was an Audemars Piguet Millenary MC12 Tourbillon platinum watch. It sold for $145,000.

The fourth most expensive watch was a men’s platinum F.P. Journe Tourbillon Souverain with manual winding, which sold for $120,000.

The fifth was a vintage Rolex Vintage Rolex GMT Master Automatic, which sold for $91,201.99.

In September, eBay introduced a new program to authenticate watches from selected sellers on its site. Three months later, it followed that with a jewelry authentication program.