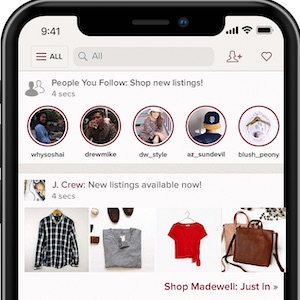 On Friday, Poshmark, an e-tailer that allows peer-to-peer sales of secondhand items, including jewelry, announced that it is filing for an initial public offering.

It is keeping the number of shares it will offer and their proposed price confidential for now, it said.

The Redwood City, Calif.–based company, founded in 2011 by Manish Chandra—who remains CEO—didn’t announce a timetable for the IPO. According to the Silicon Valley Business Journal, it had planned to go public last year, but it delayed those plans. It has received more than $166 million in funding, the publication said.

The company said the IPO will commence after a Securities and Exchange Commission review, subject to market and other conditions.

The company claims 60 million members across the United States and Canada, says it has 100 million items listed, and claims it makes sales every second.

While most of the jewelry it lists sells for less than $100, at publication time, it did list several pieces in the $25,000 range, including a 4 ct. diamond ring, a set of pearl earrings, and a used Montblanc watch.

The company is perhaps unusual among other secondhand e-tailers in that it has heavy social and mobile components. According to a survey of its users conducted last year, 58% of consumers are comfortable purchasing items through social media platforms instead of a company’s website, and 75% are comfortable purchasing items directly from people online.

In 2018, it announced that sellers had made $1 billion in sales through the site. Chandra claimed that its users open its app an average of nine times a day.

It follows on the heels of The RealReal, another secondhand site, which went public last year.

Top: An image from the Poshmark app (image courtesy of Poshmark)