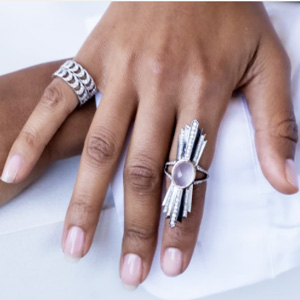 It’s fun to shop resale jewelry, apparel, and accessories on the RealReal, Poshmark, and other secondhand designer sites. But you never know who’s actually consigning the items—which, depending on your worldview, may not matter.

But consumers who enthusiastically follow influencer culture can now shop the closets of the style stars they emulate. Dora Maar, a new e-commerce site launched by Lauren Wilson, who’s done stints in the marketing departments of Christie’s and Moda Operandi, is a luxury consignment platform based in New York City that collaborates with influencers to consign pieces plucked from their own wardrobes.

Influencers currently featured on the site include Samantha Sheinson (@thenewyorkblonde), former Vogue.com style editor Edward Barsamian (@edwardbarsamian), and fine jewelry designer Deborah Pagani (@deborahpagani), who’s not only selling apparel and jewelry from her own closet, but is also consigning never-worn jewelry pieces from her line on the site.

Consignors are offered a “generous percentage” to sell their clothes, jewelry, and accessories, and can also leverage their splashy Dora Maar profiles and landing pages in their own media, explains Wilson, who launched the company in 2019 with a former Moda Operandi colleague who’s since exited the company.

The idea for Dora Maar struck Wilson while working at Moda Operandi; she witnessed the tightening relationship between traditional full price brands and luxury resale, and formulated the concept of connecting social media–savvy fashion fans with the influencers they follow—to shop.

“The idea is to let people shop the best closets,” Wilson tells JCK. “Consumers follow these people every day—they love their style, and now they can buy their pieces.” She adds that Dora Maar (named after Pablo Picasso’s muse) fundamentally sells personalties, not products: “We always go back to the concept of the muse. We’re not just going to launch a product. We launch a person and the product follows.”

At a time when luxury consumers are increasingly prioritizing brands that practice sustainability, secondhand luxury fashion—which, at its core, is recycling—is having a heyday.

But Wilson asserts that too many sellers of luxury resale take a low-budget approach. “Shopping secondhand doesn’t have to be a secondhand experience,” she says. To make Dora Maar’s user experience feel more editorial and less retail, the site employs a creative director who produces original photo shoots and behind-the-scenes videos capturing styled models and consignors chatting in their closets. (Wilson notes jeweler Pagani’s partnership with Dora Maar is especially exciting because “you never see jewelry styled the way the designer wears it herself.”)

Jewelry is a great category for the retailer for several reasons: Fine jewelry sales are currently outpacing designer apparel sales, and jewelry is one-size-fits-all, whereas the bulk of the apparel on Dora Maar is for women size 6 and under. Moving forward, Wilson plans to engage a more diverse spate of influencers, including plus-size social stars, to add more variety to the site’s offerings.

Ultimately, she says, “I want to make the process of shopping secondhand feel so much less commodified.”