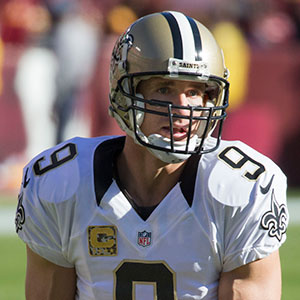 In a suit filed April 2 in San Diego Superior Court by Brees and wife Brittany, the football star claimed that, over the course of a decade, he had purchased $15 million in colored diamonds from local retailer CJ Charles Jewelers.

However, in early 2017, Brees’ financial advisor recommended he get the diamonds appraised, the suit said.

“The independent appraiser determined the true market value of the diamonds [store owner Vihad] Moradi had advised [Brees] to buy was approximately $9 million less than the prices [he] paid,” according to the court papers.

For instance, a pink diamond, for which Brees paid $1.7 million, was appraised for $1.2 million. A blue diamond sold for $4.4 million was valued at $3.7 million.

The suit claims fraud, breach of fiduciary duty, among other counts, and seeks $9 million in damages.

The jeweler could not be reached for comment at press time. However, his lawyer Eric George told San Diego’s KGTV: “Drew Brees aggressively purchased multimillion dollar pieces of jewelry. Years later, claiming to suffer ‘cash flow problems,’ he tried to bully my client into undoing the transactions. Mr. Brees’ behavior and his belief that he was wronged because the jewelry did not appreciate in value as quickly as he hoped both demonstrate a lack of integrity and contradict basic principles of both economics and the law.

“He should restrict his game-playing to the football field, and refrain from bullying honest, hardworking businessmen like my client.”

Brees’ suit can be seen here.