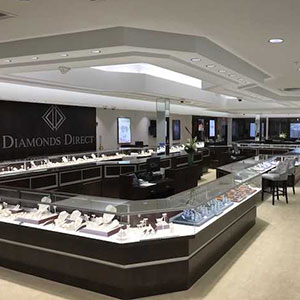 “We have been looking at Columbus for a while,” says president and CEO Itay Berger. “It’s a great market, young, growing. We are very excited about the growth of that market and the potential we see in Columbus.”

The new 6,300-square-foot freestanding store will be overseen by Tery Vari, formerly the general manager of the company’s Virginia Beach, Va., store. Vari is a native of Columbus.

Berger says the retail chain, based in Charlotte, N.C., intends to open at least one more store this year, but could not share the location.

He says that Diamonds Direct plans to continue its expansion, but it doesn’t have an eventual number of the stores it wants to hit.

“We are expanding very slowly and very healthily,” he says, noting the last time the company opened up an “organic” new store was in December 2016. “We love opening stores organically, but we usually take our time.”

Berger says he still believes that brick-and-mortar is the best way to sell jewelry.

“For all the growth of online, it’s limited in our industry,” he says. “People still want to touch, feel, and be educated with someone they can trust. The margins may not be like what you are used to, but value is not just about price, it’s about the entire package. If you carry the right selection and provide the right value, I am a big believer in brick-and-mortar.”