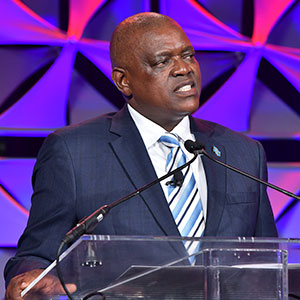 Diamonds remain the most important resource for the government of Botswana, representing one-third of the county’s gross domestic product, said Mokgweetsi Masisi (pictured), president of the Republic of Botswana, at the JCK Industry Keynote Breakfast address on May 31.

He said when Botswana first discovered diamonds in 1967, the country started what is now a five-decade association with De Beers. Eventually the pair formed Debswana, a 50-50 partnership between De Beers and the government.

“We met De Beers as equal partners, even though we were unequal to them,” Masisi said. Debswana is “celebrating its 50th anniversary this year and will probably celebrate its 100th anniversary decades from now.”

The success of the partnership turned Botswana from one of the world’s poorest countries into an ­“upper-middle-income country,” he said, explaining that the diamond proceeds “were used to develop not just the roads, but our people.”

The president was compelled to come to JCK Las Vegas because he was “curious,” he said. “Who are these people who buy our diamonds? We wanted to see what they are about. We wanted people to see us. We don’t want to be a secret anymore.”

He admitted that one day Botswana’s diamond ­resources will run out. “Sadly, diamonds are finite. We will get to a time when they are exhausted. But never will ­diamonds end. Because they are forever. They are ­developing over millions of years, using forces of nature.

Masisi also urged all those in attendance to visit the country. “You may think you have seen wildlife,” he said. “You ain’t seen nothing until you’ve seen Botswana.”

At the mention of the country’s wildlife, a protester interrupted and challenged Masisi on his government’s recent decision to lift the ban on elephant hunting.

The disturbance sidetracked the speech somewhat as Masisi waded into a long defense of his country’s actions. He said Botswana now houses 130,000 elephants, because some had migrated from other countries where there was conflict, and the elephants are outgrowing the protected areas. He hopes some of the elephants can be repatriated to Angola.

He said the hunting will be “very controlled…not trophy hunting.”