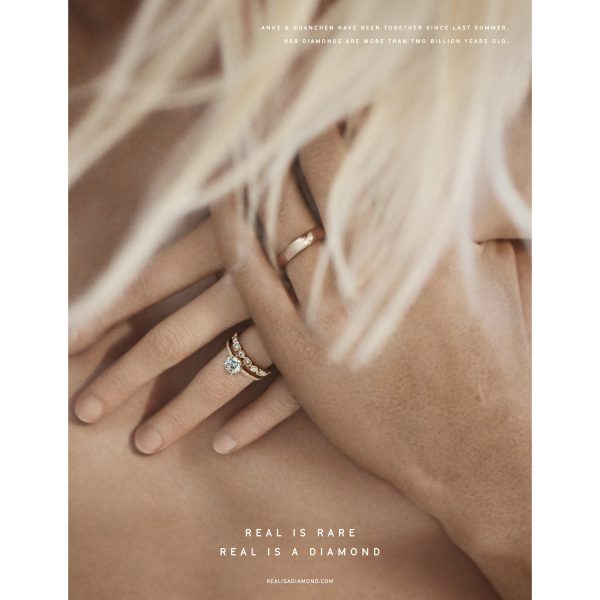 Travelers to the JCK Las Vegas show were greeted by something different when they arrived at McCarran airport: The overhead screens blared ads for the Diamond Producers Association’s “Real is Rare” campaign.

It’s all part of an aggressive new posture for the association, whose board just approved a $50 million advertising budget for the United States for this year—more than quadruple its 2016 budget.  The bulk of that spend will go to advertising in the second half of the year.

Additional allocations will be used for advertising in China and India, for a $60 million budget total.

Formed in 2015, the DPA is comprised of the world’s major diamond miners and is responsible for mounting “category-driving” campaigns for natural diamonds.

The campaign will include TV, print, and digital campaigns, as well as out-of-home advertising (like airports), all built around the DPA’s slogan: “Real is Rare. Real is a diamond.”

The print campaign will be similar to the ads that flashed at McCarran airport.

“What you see are captured moments that reflect engagement and marriage,” says DPA chief marketing officer Deborah Marquardt. “They are beautiful, tender ads that show diamonds as a gift of love.”

Retailers will have the opportunity to use and customize the DPA campaign, Marquardt says.

The DPA is also planning a retail support campaign built around “the new diamond narrative.”

DPA chairman Stephen Lussier, who also works for De Beers, says that, while next year’s budget is not set, the producers consider the DPA a long-term play.

“I really feel the key is you have to stick with it,” he says. “There is no expectation this will be some sort of one-year task.”

The group is also planning to work with a PR firm to publicize the good things diamonds do for African economies.