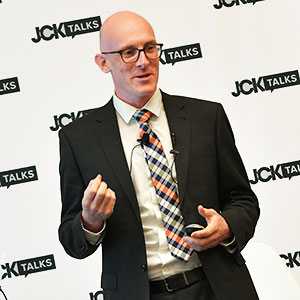 The midstream of the diamond industry is feeling a bit glum right now, Rapaport senior analyst and news editor Avi Krawitz said during a seminar on “Surviving a Turbulent Diamond & Jewelry Market,” held as part of the JCK Las Vegas educational program on May 30.

For the moment, U.S. jewelry sales remain healthy, Krawitz said, with many retailers enjoying solid sales. Last year, annual jewelry sales grew an estimated 4%, and J.C. Penney and Macy’s both reported that jewelry had sold well. He added that the best independent jewelers seem to be doing better than the majors.

Yet many dealers and manufacturers in the middle of the pipeline maintain they have little to be happy about.

Some are slightly nervous about the overall economy and worry they will be hurt by the rapidly escalating tariff dispute between the United States and China, which will result in 25% duties on a wide range of jewelry products.

The trade war between the United States and China “is affecting sentiment about the economy,” Krawitz said. “People don’t know how this is going to play out in general.”

The tariffs won’t have a big effect on polished diamonds, as China doesn’t import many diamonds into the United States, he said. However, many U.S. retailers could be affected by the increasing economic slowdown in Hong Kong and China.

Even the increase in jewelry sales has been a mixed blessing for manufacturers, since most of those sales are on memo. That increases pressure on midstream players, who are also having trouble getting financing from skittish banks.

He pointed out that over the last two years, there has been a steady increase of inventory of RapNet, and that RapNet now hosts 20% more inventory than last year. Some categories of goods clearly hold more appeal than others.

“Demand has become very narrow, and very specific, in terms of what people are looking for,” Krawitz said.

He added that the industry has undergone “tremendous change” over the last few years, and in some cases it has been slow to adapt.

To survive, Krawitz said, people in the industry need to do several things:

– Jewelers and dealers have to understand the bigger picture and how the industry fits into the larger macro environment.

– The industry needs to be flexible and understand that the tactics that were successful for generations won’t necessarily work now.

– The diamond industry has a legacy of being a handshake industry, but it needs to develop more of a “corporate mindset,” Krawitz said. “We need to have financial statements, we need to be transparent.”

– Diamond manufacturers must ensure their supply chain is efficient. “The big question is why is the industry buying so much rough, if there is such a glut in the polished market?” he asked.

– People who sell diamonds need to vouch for their product, and we need to have more source verification.

– The industry needs to tell a story and differentiate its product. “Consumers want a sexy product and they want to interact with the company that is supplying their product,” he said. “There’s no product like large natural diamonds that tick all those boxes of being beautiful and holding value.”