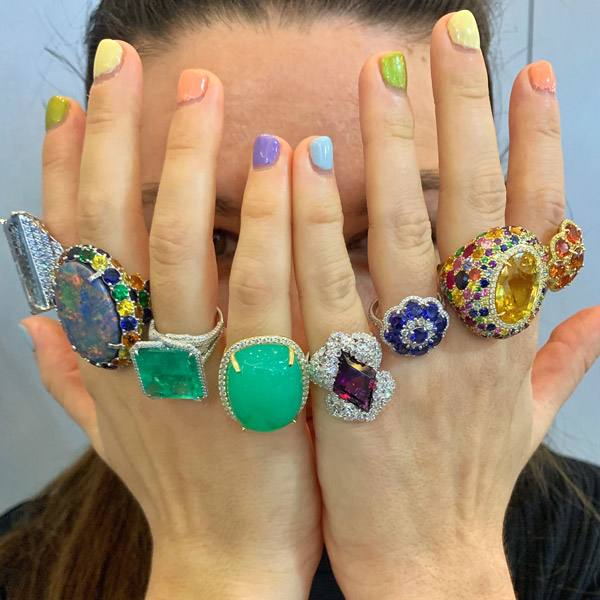 I got my start in this industry in May 2008. I was fresh out of college, and a family-owned store named Joint Venture Jewelry was kind enough to give a girl with marketing and economics degrees a shot (if you’re ever in Cary, N.C., do pay them a visit—great vintage jewelry and more!). Internet sales manager was my title, tasked with keeping the website updated with photos of the jewelry we had in-store, taking orders (there were some, but not a ton, of e-commerce sales at that time), running a blog, and doing the occasional social media post (this was a time when Facebook just became accessible to everyone—not just college students—and there was no such thing as Instagram). I also waited on customers in-store and learned so much about jewelry in the process.

A lot has happened since then. I moved to Washington, D.C., and was lucky enough to find JCK (I like to think somehow that JCK found me). And it was like a whole new world of jewelry opened up, one that I couldn’t have possibly imagined. I have encountered so much in my now nearly 12 years in this industry—people, gemstones, jewelry, experiences—and being a part of it has without question defined this decade for me.

I look forward to what the next decade brings, but as we all look back on the one coming to a close, here are eight things this decade in jewelry has taught me.

The jewelry industry is a community. I’m sorry to be so sentimental right off the bat, but this is the truest thing I’ve learned about this industry thus far—its people are the best. They support one another, they come together in times of need, and—if you’ve been to any of the trade shows, this you know—they have fun. I’ve definitely stumbled into something special here.

I am a writer (and only a writer). In the beginning of my time here at JCK, I appeared in a number of videos for JCK TV while in Las Vegas (I will not share the link here, but if you’re interested, I’m pretty sure you can find them—and then understand why I didn’t link them). You may also note my recent few lines on an episode of JCK’s noteworthy podcast (please do subscribe, though), and you will know that radio is not the place for me either. While I really like the idea of having my voice heard through various channels, the reality is that it’s really meant to be in writing—and I’m absolutely okay with that.

I’m still pretty inexperienced. Working on the 150 Voices feature for the 150th anniversary of JCK magazine is probably one of the coolest things I’ve ever done and ever will do. But it was also a reminder that my almost 12 years here is peanuts compared to the people our team collectively interviewed. Hearing the stories and recollections of JCK by those featured was awe-inspiring and humbling, and I hope to be able to put in my two cents someday when I’ve been a member of the industry for 50 years or more.

Taking photos of jewelry is still hard. I went from taking photos of vintage and consignment jewelry in a little countertop “studio” in a retail store to taking photos of all kinds of jewelry and gemstones at shows like JCK Las Vegas. Smartphones and cameras have come a long way since then, but it’s still hard. I have mad respect for the members of this industry that have perfected their at-show photography, and I’m grateful they have the avenues to share it with us all, because the best stuff isn’t coming from me.

Opals aren’t bad luck. If you’re interested, you can read my whole thing on the bad luck opal story here. The truth is, I’m still working on this one. Check back in 2030?

Rubies aren’t just for mistresses. Maybe it’s an old Southern rumor, but word had it, if a man was shopping for a ruby, it wasn’t for his wife. Now I’m all for a bit of juicy gossip, but as I’ve come to learn a lot more about ruby—and gotten a load of some pretty epic ruby jewelry—the stone that once only represented love affairs to me has become so much more. I mean, mostly.

My opinion doesn’t matter as much as I’d like to think. Not everyone always agrees with what I have to say, and that’s okay! One of the hardest parts of my job—albeit, the best part—is writing about jewelry that I love (I know, poor me!). But the challenges lie in 1) the jewelry I pine over doesn’t automatically just appear in my collection, and 2) not everyone shares my enthusiasm. I have to remind myself that just because I really like something, that doesn’t mean everyone else is going to, and whatever I write isn’t going to change that. Retailers aren’t just going to start selling a certain style like hotcakes because I’ve said it’s awesome. Still, if a retailer takes notice of something I’ve shared, and that something reaches a customer somewhere, then that’s pretty much the coolest thing that could ever happen.

JCK is as amazing as I always thought it was. JCK magazine was a hotly anticipated arrival during my time at the store. When it was my turn to read it, I’d page through, pretending to select a piece from each page I loved most—I guess they were my pre–Britt’s Pick picks. I never imagined I’d actually get to work for JCK and get paid to do something not all that dissimilar. But this gig is more than just sparkly things—it’s an incredibly supportive team, a door to an endless world of awe-inspiring people and talent, and a place for my voice. What a dream come true.

Here’s to the next 10 years, may yours be as good (or better!) than the last!