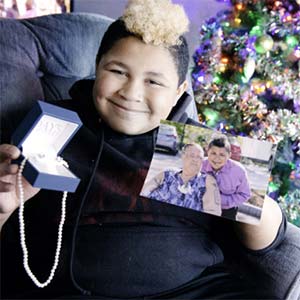 Kaden James, a sixth grader, went grocery shopping last week with his grandmother in Auburn, Maine—and at some point, the 11-year-old slipped into fine jewelry store Day’s Jewelers, which neighbors the grocery store.

Maine’s Press Herald reports that James started chatting with employees about how he wanted to buy a special gift for his mother, Michelle James, who has undergone 16 surgeries this year, including the amputation of her left leg to combat a flesh-eating bacteria. She’s currently in the ICU at a local hospital.

James told an employee how much he had in his bank account, wondering if it was enough to purchase something nice.

“As they started talking a little bit more, he explained how long his mom had been in the hospital,” Vanessa Phipps, assistant manager at Day’s, told the news outlet. The saleswoman he was talking to told Phipps, “We have to do something.”

The employees brought out three pairs of pearl earrings for James to pick from, then wrapped up his pick—along with a pearl necklace—and presented both to James in a bag for him to take. Phipps reported later that six employees at Day’s pitched in to buy the jewelry.

“It was really precious,” Phipps told the outlet. “He had tears in his eyes because he was so touched. ‘You guys didn’t have to do that, I don’t want to take this.’ I told him, ‘When you come shopping for your girlfriend, make sure you come see us.’”

James’ grandmother, Diane Trepanier, was understandably shocked to see the bag from Day’s Jewelers in her grandson’s hands when they got home and eventually the pair went back into Day’s.

“When I went in, they said they’d never seen such a polite little boy in all their lives,” Trepanier told the Press Herald. “I feel so good for him. He’s been having a hard time because he’s really close to his mother. It’s been rough.”

Phipps said the gesture, for her, “was really kind of what Christmas is all about.”

James will give the presents to his mother Christmas morning.