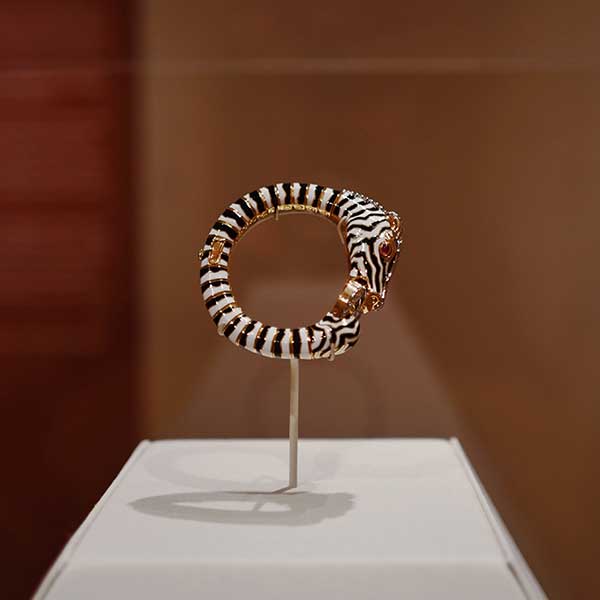 The Metropolitan Museum of Art has added an iconic bracelet by American jeweler David Webb to its permanent collection. At present, it’s on view as one of the central features of the museum’s new “Jewelry for America” exhibition, which opened last week and will run through April 5, 2020.

The exhibit spans 300 years of jewelry in America; the David Webb bracelet, a zebra design expressed in black and white enamel, is from 1963.

Today, the Zebra is one of the house’s most recognizable and sought-after style icons. Its image is even projected onto the window shades of the chandelier-lit workshop on New York City’s Madison Avenue, glowing like a hologram or a benevolent spirit.

Over the years, the animal has lent its stripes to everything from brooches to pendant earrings. (Diana Vreeland, new to her role as editor of Vogue, owned one of the first Zebra bracelets and seems to have used it as a muse for a September 1964 cover, complete with the model flashing a David Webb zebra motif cocktail ring.)

This is the first David Webb design to be acquired by the Met for its permanent collection. Today’s Zebra bracelet is hand-crafted by the son of the original craftsman and enameled by the house’s expert enamel artist.

It’s fitting, David Webb’s PR department noted, that a piece of the founding designer’s jewelry should now reside at the Met, considering that Webb himself often frequented the museum seeking inspiration for his work. On Aug. 12, 1963, Webb wrote an article titled “Why Not Hang Gems?’ for the New York Herald Tribune, in which he argues, “Jewels, though more personal than paintings, should be treated as great works of art, which they surely are. Collections of great jewelry should be exhibited to the public as are other great works of art.”

Top: David Webb’s iconic Zebra bracelet has joined the Metropolitan Museum of Art’s permanent collection. It currently makes its home in Gallery 773 of the American Wing, where it will remain on view through April 5, 2020.