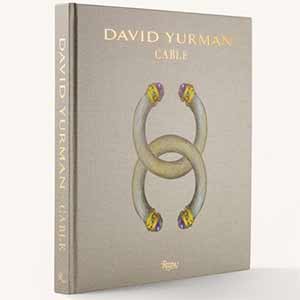 I’ve been back from Tucson for less than 24 hours and have yet to go through my copious notes from the 2018 gem shows. Stay tuned for a proper recap.

In the meantime, however, chew on this: The highlight of JCK Tucson 2018, which concluded its four-day run at the JW Marriott Tucson Starr Pass Resort & Spa on Saturday (Feb. 3), was an hour-long Fireside Chat with designing duo David and Sybil Yurman. Below is a transcript of the talk, edited and condensed for clarity.

Expertly moderated by Robert Weldon, manager of photography and visual communications at GIA, the conversation touched on many things: the Yurmans’ artistic roots in the craft jewelry scene, the introduction of their iconic Cable bracelet in 1983 (the subject of a 2017 coffee table book published by Rizzoli), and their conviction that owning your message is critical to success. Overall, however, it was the power couple’s candid and authentic storytelling that impressed the people I spoke to. 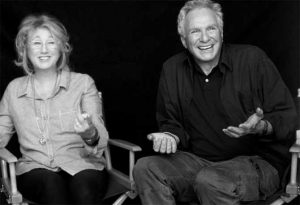 Robert Weldon: Let’s go back to the beginning. Can you describe what the 1980s were like for you?

David Yurman: We came out of the craft world and were figuring out how we would enter the mainstream and not lose our identity. Jewelry was sold by categories: emerald, ruby, sapphire, pearls, and all gold. That was the landscape.

It was really boring. It lacked a point of view, a sense of feeling, and craft had all the feeling, all the juice. It was pretty sad and it was difficult for anyone to use their name in a showcase. Every [retail] jeweler would say, “I made this, it’s mine.”

We would only sell [to stores] if they bought a collection, and only if there was enough space—a collection would be as little as 20 pieces. It had to tell a story.

Sybil Yurman: Pieces were divided by color and classification. People don’t realize how different it was to what it is now. That was a major struggle and a crusade on our part. I didn’t have any other concept of how we’d present it.

Also, for someone to buy multiples of something was very unusual. We were very strict about it and we wrote a contract to deal with the stores. We didn’t know any better. We didn’t do it out of arrogance; we did it out of a certain ignorance of what was the way.

Weldon: You were real pioneers. That’s what differentiated you from other designers. Was there any other element that contributed to your success?

Sybil: Yes, the fact that we used gold jewelers to make silver jewelry so it was fine jewelry. It was unheard of. It was either Mexican or Indian jewelry, that was it.

There was Georg Jensen, Danish jewelry, but it was not easily accessible. It was unheard of to get jewelers to work on silver in a fine manner, and it was very difficult.

Our jewelry was silver and gold. Most of the value and workmanship went into the gold. That’s how we got jewelers to agree to work on the piece.

Weldon: The celebration of gemstones and precious metals differentiated you from the beginning. But there was also that commerce aspect. How did you build a business and at the same time maintain your artistic element?

David: It was probably the most difficult thing to do. The aesthetic part was the easy part. You knew that if you wanted to scale up, you hired people to do that. At the beginning, we had a bookkeeper.

Both Sybil and I have left/right brains and I would say that together, we made one small person. We fought a lot and we still do, but we’d still go to bed together and we’re happy, 50 years later.

Sybil: The crucial part of what we’ve done: We did not set out to create a business. It was not our objective. We wanted to make things.

In order to be able to do that, we had to be able to sell what we made. And that was a daunting experience. Neither of us came from money. We borrowed $500 and the Jewish Free Loan [Association] is the only one who’d lend us anything.

How this all started is David made me a piece of jewelry and he was making sculptures, and I said they’re really beautiful but I’d love to be able to wear one. So he made me a necklace with all these figures that held hands in the back.

We went into a gallery on Madison Avenue and the gallerist said, “That’s really beautiful. Where did you get it?” She asked if he could make more. I said yes and David said no at the exact same time.

He was saying, “No, I made that for her,” and I was saying, “Don’t worry, honey, we can make more.” We left my necklace with her and by the time we got home, she had sold four of the pieces.

She asked if the price we gave her was the retail price. But no, it was obviously the wrong price if she could sell four in a 20-minute cab ride. Each week we made them we raised the price.

David: So we doubled our margin in the cab ride.

Sybil: And that’s how we learned about margin.

David: If you sell too many too fast, it’s too low.

Weldon: David, was there something else?

David: We became retailers. You make these things and they go into other people’s environments and then you go there and say, “My God, what is this?” Control your environment. You have to own your message.

As designers, the best thing we do is connect to the human spirit. It’s a party, you’re opening the door and inviting them to your party. This is your feast and you can take this home with you.

Sybil: The question you asked about what was the landscape like when we came to industry: The craft world was very small, not a very big world of jewelers. And the American jewelry market, it was a casting business so there were casters and casting houses; so you picked a silhouette and bought stones and put those stones into someone else’s earring.

That was what the world looked like. There was Hendry Dunay, Jose Hess, and David Yurman at that time.

Weldon: That does segue into my next question. If we go back to the ’80s, you were also beginning a revolution in the way business was done. Spearheading agreements with retail partners. That was very unusual at the time.

David: We diagrammed for them where we wanted the product to go.

Sybil: We only did business with people who were of like mind. We didn’t borrow any money. We knew how to help you sell our product in your location. If you wanted us to do that with you, for you, and we formed a partnership is how we did it. It was based on a lot of respect for each other.

Weldon: Somehow David Yurman is always fresh. How do you maintain that fresh look, that fresh appeal?

Sybil: We keep him well-fed. [Laughter]

David: We plan design now a lot more than we did before. We do over 250 designs each season. We make too much design, I’m sure.

All you designers make too much. You should get someone in your family to say, okay, you made these 25, maybe pull out these 10.

You’re designers, not artists. Artists do whatever they want to do. Designers—we decipher what the demand is. We still keep true to our aesthetics, but we have to understand we’re not just artists doing whatever we want to do.

If you have a store and a customer base, you probably need a good merchant. What would you like to see that I don’t have? This isn’t about you. You’re filling a market need. You think you’re giving away your soul but you’re really not. You’re just more focused.

Sybil: How do you stay fresh? Two things: One, David does all the original drawings, all the sketches—gives us the sketches, the proportions. Then we have an assistant who takes it into CAD. But the originals come from an original point of view.

Everybody here: Your point of view is a river that runs through everything that you do and comes from a reflection of who you are. To be able to listen to it is really important. And our river is around what we design, what our taste is, and it comes back to the thing that’s made us successful: The ability to listen to every retailer we dealt with and respected their customers. And by listening we could anticipate what was going to be important in the market.