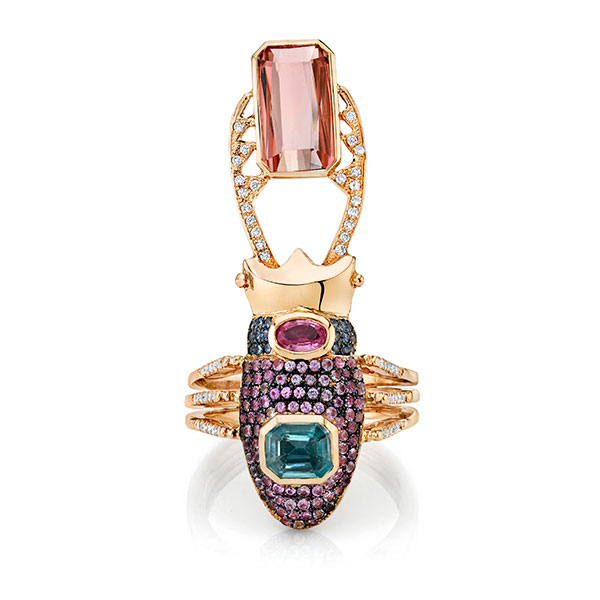 Having recently fallen under the spell of Daniela Villegas (most of my JCK colleagues are longtime devotees of her of her whimsical amphibious and entomological motifs and affinity for the most luscious colored gemstones), her latest collection left me with kaleidoscope eyes and a head full of questions about the Mexican-born, LA-based designer’s inspirations.

Unveiled earlier this month during Paris Fashion Week, the collection is its own little ecosystem, one that tunnels through swampland, meanders ocean floors, and even breaks through to a fanciful dimension, one where coyotes wear crowns of feathers and flowers and common songbirds live in miniature palaces with gilded branches and rainbow windowpanes.

Nature is a perennial theme for the designer, as JCK‘s Emili Vesilind shared in this interview last year on the occasion of the line’s 10th anniversary. This season, Villegas explored similar material, returning to favorite motifs such as the beetle, snakes, and the undeniable hero of this offering, the crab.

It’s a favorite motif for Villegas because her late grandfather’s astrological sign was Cancer. She’s also inspired by the crustacean’s spiny exoskeleton, as well as its symbolism: protection, vulnerability, and rebirth (crabs shed their shells and grow new ones).

As a talisman, crabs are also thought to have a balancing effect on the emotions, an idea that Villegas embraced with this season’s El Descanso necklace (there are several versions, including the style below). “El Descanso means ‘the place that you go to rest and chill,’ ” says the designer. “I want for that piece to transport you to a place that you feel at peace and happy.”

In addition to water-dwelling creatures and an entire nature study of invertebrates, Villegas also captures inhabitants of an enchanted forest or underworld led by carved gemstone coyote rings. According to Villegas, coyotes are known for being resilient, playful, and full of hidden wisdom, reminding us to adapt ourselves to the situation at hand and make the best of it no matter what.

In crowning her coyotes with tiaras, Villegas hoped to transform the animal into a symbol of dignity. “We must honor, respect, and be proud of ourselves in order to shine from within with our own sense of empowerment.”

Below, more pieces that promise to slither and scuttle their way into your heart.