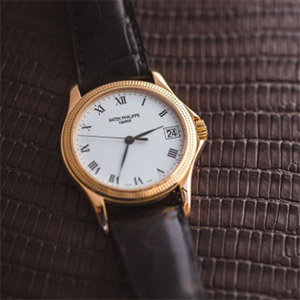 There’s no denying that pre-owned is hot, hot, hot. And those retailers homing in on the (seeming insatiable) consumer demand for vintage Rolex, Panerai, Omega, etc., are seeing their bottom lines grow.

Atlanta-based Crown & Caliber, founded by company CEO Hamilton Powell, is striving to differentiate itself from competitors in the category with a new “trade in, trade up” program in collaboration with new luxury watch seller Troverie.

The program offers owners and collectors of high-end timepieces the opportunity to trade in pre-owned watches toward a new luxury timepiece, cash, or a Troverie gift card. The setup effectively removes the wall that’s always existed between pre-owned and new luxury timepieces at retail, introducing a new fluidity between buying, selling, and trading both new and secondhand watches.

So what are the top timepieces being bought and sold now?

Powell and his team kindly whipped up a list of the most in-demand watches circulating now on Crown & Caliber for JCK, informed by the company’s deep well of digital consumer data.

These models are, in Powell’s estimation, the most investment-worthy timepieces currently cycling in the market.

“It was the first watch on the moon, and people love that,” says Powell.  “There have been a lot of recent sales at auction of Speedmasters that have gone for high values. And the vintage market really affects the modern market. It’s a tide that raises all boats.”

“It’s just a very popular model,” he notes. “It’s  been a classic for a long time, and people love that.”

“It’s about the most minimalist, elegant, sophisticated watch you can buy,” says Powell. “We’re seeing as a general trend in watches that there’s less of an interest in 18k gold; people are really liking stainless steel. And so with the Calatrava, we’re seeing more of an interest in the white gold version. People like the look of stainless, it’s more understated.”

“It’s obviously insanely classic, not just for men but for ladies, too,” he says. “Jackie O.’s tank watch sale [the timepiece sold for $379,500 in 2017] gave the watch another push. We’re also seeing a lot of guys liking the Tank—the white gold version is really hot. And it doesn’t get any better than seeing a Tank on a leather strap.”

“There’s been a move away from watches with larger faces, but Panerai’s been the one exception to that, because of its classic, minimal looks. The brand is our fifth best-selling brand.”

“We’ve got some really interesting data on the Daytona 1650,” he says. “The average sale price spiked 50 percent between 2012 and 2018. I’d say there’s a couple of reasons why. The vintage world has increased its popularity, and Rolex has done such an incredible job of limiting the supply of the watch, which is creating a surplus of demand.”

“The exact same thing is going on with the Explorer II—the supply is low, and the prices are getting higher because of it.”

“IWC is the sixth biggest brand on the site,” says Powell, “and the Portuguese is just a classic, just a beautiful watch.”

“I can’t say enough about Tudor,” he adds. “They’ve built a brand in the shadow of Rolex, and it’s absolutely a stand-alone brand. The Black Bay in particular does a great job of pointing to the roots of Tudor.”