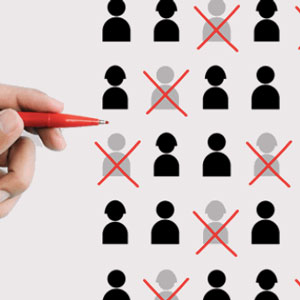 “This is the most difficult moment this business, built with such care and love, has ever faced,” Rony Vardi, cofounder of Catbird wrote on the shop’s Instagram feed last week. “We have held out as long as possible, but we have no choice but to temporarily lay off a portion of our staff until we can reopen.”

The trendsetting fine jewelry store in Brooklyn, N.Y., is one in presumably thousands of U.S. jewelry and fashion businesses actively making staffing cuts—or at the very least facing the prospect of downsizing—in an attempt to ride out the the COVID-19 pandemic, which is already having grim effects on the retail sector (save Amazon and grocery stores, which are doing better than ever).

“This is temporary,” Vardi added in her letter and noted that all the laid-off employees will be eligible for full unemployment benefits. “We plan to rehire and be reunited with our staff as soon as possible.”

While small jewelry retailers such Catbird are at risk of losing valued, trusted employees during the pandemic—a soul-crushing reality for all involved—layoffs by midsize and major retailers have the potential to erode the U.S. economic landscape, which will further belabor the United States’ financial recovery process.

Predictably, the retailers already struggling with declining revenue are the ones that have begun (or begun to strategize) layoffs.

Embattled department store chain Macy’s said in a statement Monday that it’s lost “the majority” of its sales due to store closures and will therefore furlough the majority of its employees this week and maintain the “absolute minimum work force needed to maintain basic operations.” Macy’s had 130,000 part-time and full-time employees as of Feb. 2. The company also owns Bloomingdale’s and Bluemercury.

Fashion, accessories, and jewelry rental brand Rent the Runway laid off its entire retail staff (via video-conference service Zoom) on Friday, The Verge reports. The company operates brick-and-mortar locations in California, New York, Chicago, and Washington D.C., all of which are currently closed due to quarantines.

“We have no visibility into when or if we will be able to reopen our stores,” a company representative told employees, as reported by The Verge, which noted that the company’s stores had been struggling even before the pandemic. “As a result of this, all retail roles are being eliminated. This was a heartbreaking decision.” Former employees are receiving severance pay and two months of health insurance, and the company sent them instructions for applying for unemployment.

Fashion retailer H&M, owned by Hennes & Mauritz AB, announced March 23 it was preparing to lay off tens of thousands of employees globally (most temporarily, it hopes) due to the pandemic. The company employed 123,000 people in 2018.

The White House’s announcement Sunday that the mandatory closures of nonessential businesses in states including California and New York will continue through April 30 were widely applauded by health and infectious disease experts. But the extended closings will surely result in more retail layoffs—and closures.

The reality of this is painful, and retailers currently working from home are undoubtedly feeling helpless and frustrated. Sugarcoating the situation is impossible. But jewelry design legend Roberto Coin said it best when he reminded JCK news director Rob Bates in early March, “Business will come back. People don’t come back.”

Hard times are ahead. Batten down the hatches. But also remember that the United States has a rich history of rebounding from the brink of catastrophe. We can do it again.