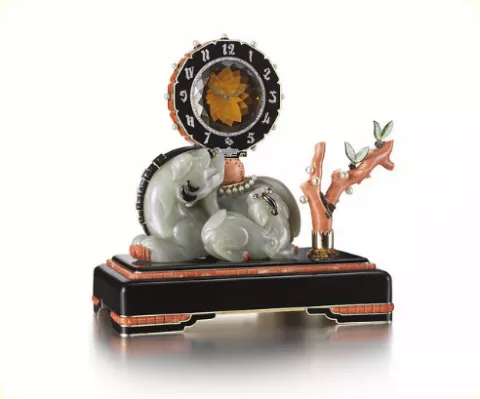 Some people simply have amazing taste. Prince Sadruddin Aga Khan, who served as United Nations High Commissioner for Refugees from 1966 to 1977, was one of those people.

So much so that the Smithsonian’s Cooper Hewitt Museum in New York City will host an exhibition showcasing 100 examples from his vast collection—and that of his wife, Catherine—of artworks, objects, and jewelry.

The exhibition, “Jeweled Splendors of the Art Deco Era: The Prince and Princess Sadruddin Aga Khan Collection,” which will run from April 7 to Aug. 27 in the museum’s Teak Room, will include cigarette and vanity cases, compacts, clocks, and “other luxury objects…from the premier jewelry houses of Europe and America,” according to museum literature on the show.

A number of the items set to be shown were personal gifts from the prince to his wife. The collection was amassed over three decades and “displays the excitement, innovation, and creativity of the Art Deco era at its most luxurious,” according to the same literature.

The prince, who was born in 1933 and passed away in 2003, was the son of an imam, Sir Sultan Mahomed Shah Aga Khan III, and became a respected collector of Islamic art—accumulating artworks for over 50 years. He was a regular at auctions held by Sotheby’s and Christie’s in Europe and North America throughout his adult life.

His collection included Arabic, Persian, Turkish, and Indian pieces dating back to the 10th century—he once bought a Koranic page of North African origin written with gold lettering in the Kufic script that’s over 1,000 years old.