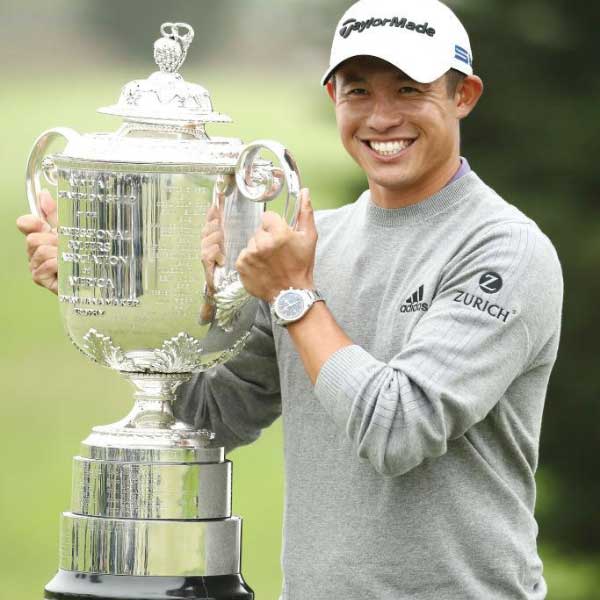 Sunday night, while I sat I working on a jewelry story as my husband watched the PGA Championship in the other room, little did I know that our two worlds would collide the next day (a rarity).

On Monday I received word in my inbox that the golf championship winner, Collin Morikawa, was wearing an Omega Speedmaster ’57 (pictured below) when he received the prestigious Wanamaker Trophy (pictured at top)…

…and took home a Seamaster 300 (pictured below) as part of his prize.

My husband has since filled me in on how major this victory is, given that Morikawa is just 23 years old. He is, in fact, one of the youngest golfers ever to win the tournament and beat out some of the marquee names on the leaderboard, including fellow American Dustin Johnson and Englishman Paul Casey, who placed second and third, respectively.

For golf nuts, another factoid of interest: Morikawa now has the lowest closing 36-hole score by a champion in the history of men’s major tournaments, according to the PGA.

Morikawa is an Omega ambassador, alongside Rory McIllroy, who won the PGA Championship in 2012 (also at age 23) and 2014.

Omega has served as Official Patron and Official Timekeeper of the PGA Championship since 2011. Held this year at TPC Harding Park in San Francisco, not far from Morikawa’s alma mater, University of California, Berkeley, the tournament is one of golf’s four major championships—the British Open was held earlier this year, and the U.S. Open and Masters tournaments are scheduled to take place this fall.

All events have been spectator-free due to the pandemic, yet another detail that proves nothing about 2020 is normal. But Morikawa’s win also means great things can happen seemingly from out of nowhere. Maybe the same will be true of watch sales this fall and holiday—and if Omega is one of your brands, the luster of a recent championship golf victory can only help your game.

Top: American golfer Collin Morikawa, an Omega ambassador, was the winner of Sunday’s PGA Championship. He is one of the youngest players ever to win the prestigious tournament (image courtesy of Omega).