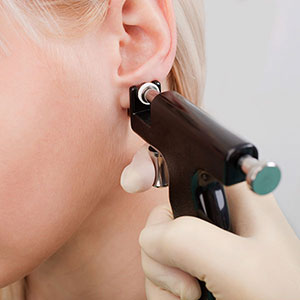 A Facebook complaint from a former Claire’s employee has gone viral, sparking a debate about how employees should handle unhappy children who clearly don’t want their ears pierced.

In her open letter to Claire’s corporate—which has garnered thousands of reactions and led to numerous news stories—Raylene Marks, a former employee of Claire’s in Edmonton, Alberta, said she reached her “breaking point” with the retailer last week, when a 7-year-old was brought in to get her ears pierced. According to Marks, the girl very obviously did not want to go through with it, even with a (piercing) gun to her head.

“The girl pleaded and sobbed for 30 minutes not to be pierced,” said the post. “Despite Mom saying, ‘Honey, we can go home whenever you want,’ she was not letting her daughter go home. She was putting a great deal of pressure on her daughter to go through with the piercing.

“That child’s message was loud and clear to me: Do not touch my body, do not pierce my ears, I do not want to be here. I’m inclined to respect a child’s right to say, ‘NO,’ to any adult forcing any kind of non-medical contact on them, so I told the other piercer I wouldn’t be part of the ear piercing for this girl.”

In the end, the mother decided to take the girl home, to Marks’ “great relief.”

The next day, Marks’ manager told her, if the mother insisted, she would have had to do the piercing.

“I brought up the worst scenario I could think of. I wanted to know how far we were supposed to take this policy of piercing non-consenting children. ‘So if a mother is physically restraining her daughter, holding her down and saying, ‘DO IT,’ while that little girl cries and asks me not to, do I do the piercing?’ My manager did not hesitate to respond, ‘Yes, you do the piercing.’”

Her post noted that Claire’s corporate policy says it “reserve[s] to the right to refuse an ear piercing if a successful one cannot be done.”

“There is no mention of the use of physical restraint by the parent, or the employee’s right to refuse an ear piercing if their concerns are for the emotional welfare of the child,” she added. “Basically, if I’m not going to get kicked in the head by that restrained child, or if that hysterical seven year old is unlikely to knock the gun from my hand, I must go ahead with the piercing.”

Claire’s could not be reached for comment. However, on its Facebook page, the company told a commenter that it believes Marks “acted appropriately in line with our policy by refusing to do the piercing.

“The policy is in place to ensure that if a child is distressed or resisting, Claire’s employees have the right to refuse to continue the piercing.” It added, “We are investigating the specific store instances she mentions, and will take appropriate corrective action. We will also be reviewing the policy to ensure that the intent is clear.”

Marks says that Claire’s also reached out to her personally, to assure her that corporate policy allows employees to refuse to pierce “distressed and resistant” children—and that it will revise the policy so it can’t be misconstrued.

In a follow-up post, Marks noted the Claire’s employee hotline originally told her the opposite. She said that she’s not sure a policy revision will fully address the issue, but it’s a “great start.” Claire’s employees are under “tremendous pressure” to meet a daily goal of seven piercings a day, she added.

“I do feel that the pressure to meet the on-paper goals has contributed to managers allowing for things to take place that really shouldn’t be taking place,” she said, noting that at one point, she was under so much pressure to make her quota, she got her own ear pierced.