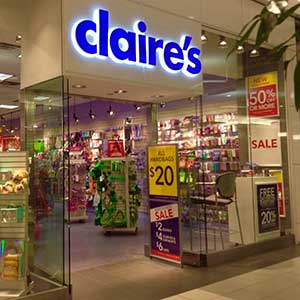 Vero most recently was president of Party City Retail Group, which numbers 1,000 retail stores in North America and Europe.

He is the company’s third CEO in the last year, and its fifth CEO since 2012. He replaces Kevin Corning, who has served as interim CEO of Claire’s since March. Prior to coming to Claire’s, Corning was the international executive vice president for Cartier, according to his LinkedIn profile. After Vero’s transition into the CEO role is complete, Corning will return to the Claire’s board of directors, where he has served since October 2018.

Corning, in turn, replaced Ron Marshall, the former president and CEO of the Borders bookstore chain who guided Claire’s through its 2018 bankruptcy.

Claire’s filed for bankruptcy last March in a prepackaged filing, but it emerged from Chapter 11 seven months later.

Claire’s numbers 2,421 stores in 17 countries in North America and Europe. It also has 6,794 concession locations, as well as 571 franchised stores in 26 countries.

“Claire’s is at a moment of great potential, as the retail industry continues to change rapidly and consumer preferences continue to shift,” Vero said in a statement. “I’m looking forward to leveraging these opportunities to ensure the company is well-positioned for growth and that we are doing everything we can to provide our customers with the fun, unique products that they love.”

Board chair Samantha Algaze said in a statement: “Ryan’s track record of growth through innovation makes him the ideal leader to drive Claire’s into the future. We look forward to this new era for Claire’s.”