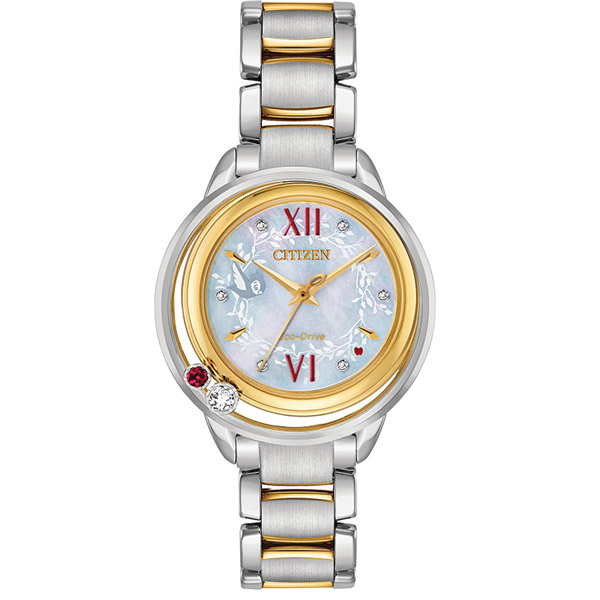 The holidays seem like a popular time for Disney-related news, and with good reason: It’s gifting time, and licensed product from the entertainment behemoth sells.

And so today has another bit of Disney product in store—this time, from Citizen Watch.

This is far from the first of Citizen’s collections in partnership with the Walt Disney Co., but in this case, its new additions are available exclusively through Zales.

Walt Disney’s original princess, Snow White is represented by a woodland scene, the character’s floral wreath pattern etched onto mother-of-pearl and decorated with a single sweet little bird. Between the 3 and 4 o’clock markers, the fateful apple icon sits, and a single diamond and Swarovski Genuine Topaz round out the dial’s design. Turn the watch over, and it reads “Fairest of them all,” the fairy tale’s famous phrase.

Cinderella’s version features a serene blue gradient mother-of-pearl dial, with Roman numerals and hands reminiscent of the clock that strikes midnight. Nestled among them is a silver-etched image of the princess’s pumpkin coach, while a single diamond shines from the 12 o’clock position. On its underside is the phrase, “A dream is a wish your heart makes.”

Everyone’s favorite lovestruck 16-year-old mermaid gets the Citizen treatment with the Ariel timepiece, an under-the-seaworthy look with gradient teal mother-of-pearl dial complete with the Little Mermaid’s shimmering fins. A clamshell sits at the 12 o’clock position, while a diamond and purple Swarovski Genuine Topaz float freely on the watch’s outer ring. The piece is engraved on the back with the phrase, “Above the waves adventure awaits.”

Rounding out the fabulous four is my personal favorite and true beauty, Belle of Disney’s Beauty and the Beast. The brunette bookworm is repped by an image of the Beast’s bell jar–ensconced enchanted rose against a background of luminous white mother-of-pearl, while a flurry of diamonds are scattered across the dial. The outer ring of the piece is adorned with a single diamond and a yellow Swarovski Genuine Topaz. The back reads, “Find the beauty inside.”

In more jewelry related to Disney’s new film Frozen II, Arendelle’s royal sisters Elsa and Anna have their own timepieces, too. In Elsa’s version, the snow queen is represented with an icy snowflake against a background of blue mother-of-pearl, with a flurry of diamonds swirling about the dial. A gray mother-of-pearl background is given to Anna’s version, where a scene of wheat plays with a set of diamonds that alternate with rose gold markers.

The collection is available just in time for the holidays, exclusively at Zales and at zales.com.