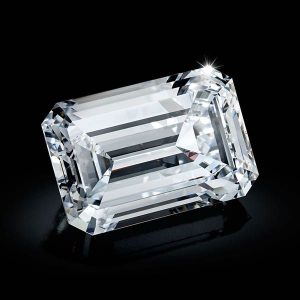 On Nov. 14, Christie’s will auction a 163.41 ct. D Flawless, which it calls the largest D Flawless to ever come to auction.

The sale, which will take place at the company’s auction house in Geneva, Switzerland, is part of Christie’s recently announced partnership with 25-year-old Swiss design house de Grisogono.

No estimate was given.

According to the Christie’s release, the diamond was cut from a 404 ct. rough, discovered in early February 2016 in the Lulo mine in the Lunda Sul Province in Angola. That 404 ct. stone is the 27th largest piece of white rough ever found, and the largest ever found in Angola.

It took 10 diamond specialists 11 months to cut the stone, which was then set in a necklace with 18 emerald-cut diamonds and two rows of pear-shape emeralds. According to a release, this was a nod to the superstitions of de Grisogono founder Fawaz Gruosi, as green means good luck. 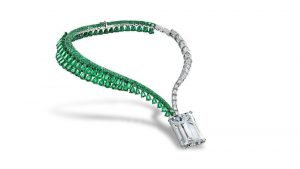 De Grisogono seemingly has strong ties to Angola. According to The New York Times, the company is owned by the dos Santos family. Until last month, José Eduardo dos Santos served as Angola’s president.

A de Grisogono spokesperson told JCK: “As you may be well aware, de Grisogono is a privately held company and is not legally obliged to declare shareholder details.…De Grisogono[‘s] procurement process is auditable and totally ethical.”