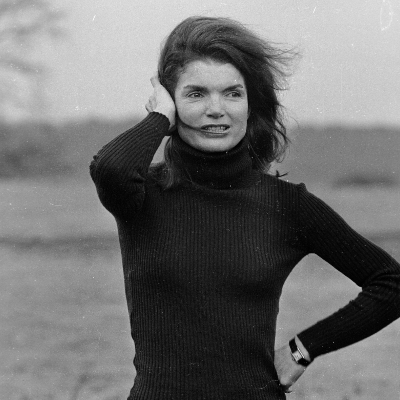 In its upcoming Rare Watches and American Icons auction in New York City, Christie’s will feature a Cartier Tank watch that was owned by—and was a firm favorite of—Jacqueline Kennedy Onassis.

A gift to the first lady from her brother-in-law, Prince Stanislaw “Stas” Radziwill, in 1963, she wore this particular Tank watch for decades. It can be seen on her wrist in many photos (like the one to the right).

The gold watch features the engraving: “Stas to Jackie 23 Feb. 63 2:05 AM to 9:35 PM.” According to Christie’s, the message refers to the start and end times of Radziwill’s participation in the president’s famous 50-Mile Hike—part of a fitness trend President Kennedy initiated with his challenge to Americans to engage in vigorous exercise. 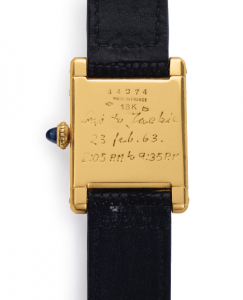 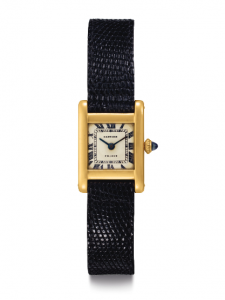 The watch’s estimated selling price at the June 21 auction is $60,000–$120,000. But we’d be surprised if the final price didn’t soar over that top estimate—in part because the watch comes with a very cool companion painting.

The winning bidder will be treated to an original painting by Kennedy Onassis created in 1963 as a gift for Stas Radziwill to celebrate the hike. It bears the dedication: “February 23, 1963 2:05 am to 9:35 pm / Jackie to Stas with love and admiration.” (Stas Radziwill and Chuck Spalding, both featured in the painting, were among the first to attempt the 50-Mile Hike.) 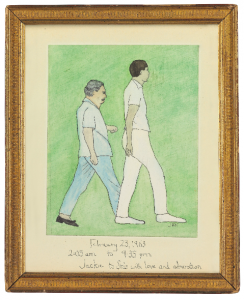 In a prepared statement, Christie’s said the watch and the accompanying painting, which was previously unknown to the public, are “two of the most important historic artifacts to surface in recent years from the golden era of the Kennedy presidency.”

John Reardon, Christie’s international head of watches, said in the same statement that the watch and painting are two objects that “capture the spirit of another era, a time where friendship and the ‘can-do’ optimism of the generation seemed to make anything possible.”