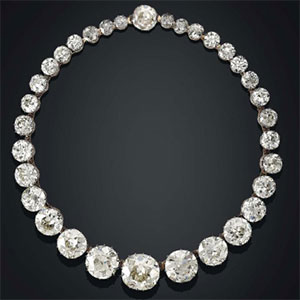 After a marathon 12 hours of bidding, the much-watched Christie’s Maharajas & Mughal Magnificence auction brought in $109,271,875, with 93% sold by lot and 92% sold by value. The selection of jewels was curated from the Al Thani Collection, which includes more than 6,000 objects. JCK’s Amy Elliott previewed the sale here.

The auction fetched the second-highest total for a private jewelry collection ever—right behind the 2011 sale of Elizabeth Taylor’s jewels, which totaled $115.9 million. Many in the jewelry world wondered if the Maharajas sale, which was presented to a packed house in New York City yesterday, would set the new high-price bar. Ultimately, it fell slightly short.

No matter. Records were set throughout the day: Three world auction records were set for Indian works of art, and 29 lots fetched more than $1 million.

The top-earning lot was Cartier’s icy Belle Époque devant-de-corsage (above), created in 1912, which sold to a private collector in the room for $10,603,500.

Here were the other top lots, in descending order of sale price.

Other notable results included important signed pieces by Cartier—which had more items in the sale than any other jeweler—including the spinel, natural pearl, diamond, and emerald bead Imperial Moghul necklace and earrings, that sold for $1,935,000 as a set.

Sale registrants hailed from 45 countries across five continents, according to Christie’s, and 50,000 people visited the sale’s five-day public exhibition in New York.

“We are very honored to have been entrusted with this magnificent and diverse selection of jewels, art and objects from the larger Al Thani Collection,” said Guillaume Cerutti, CEO of Christie’s, in a prepared statement. “The strong results today, after 12 hours of nonstop bidding, in front of a packed room and with phone and online bidders from all over the world, reflect the exceptional quality of this special collection and position it among the most storied private collections ever featured at auction.”

More info on the auction and its results can be seen here.

(All photos courtesy of Christie’s)