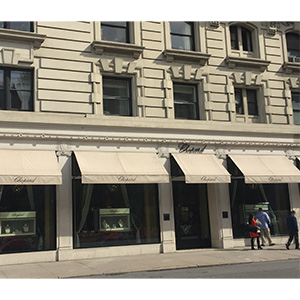 Swiss watch and jewelry-maker Chopard plans to relocate its New York City flagship boutique to the corner of Fifth Avenue and 57th Street, which it calls “the most exclusive retail setting in the United States.”

Neighbors at this new exclusive setting will include Tiffany & Co., Harry Winston, and Mikimoto.

Since 2003, Chopard’s New York City flagship (pictured) has been located on Madison Avenue at 63rd Street.

The new store will reside in the Crown Building, which was designed in 1921 by Warren and Wetmore, the architecture firm that also worked on Grand Central Terminal. The Crown Building will also house the new luxury Aman New York hotel and residences.

The Scheufele family has owned Chopard since 1963. In a statement, the family said, “We did not hesitate when the opportunity arose to open our flagship in the legendary and historical Crown Building. Even in these uncertain times, our family maison is looking to the future. The opening of this boutique in 2021 is also a message of hope and optimism addressed to New York and New Yorkers whom we so greatly admire.”