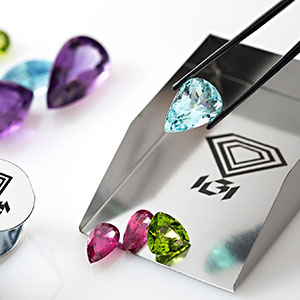 Under the previous structure, co-owners Roland Lorie and Marc Brauner owned 60 percent and 40 percent of the Antwerp, Belgium–based lab, respectively, according to the filing. Under the new structure, Lorie will continue to own 20 percent and stay on as CEO of IGI, while Brauner will step down.

“In today’s world, a lab needs to be fully equipped to handle lab-grown diamonds, imitations, and R&D,” he says. “You realize one day you are a family business, but most of our competitors are not family businesses, they are corporations like GIA, IIDGR [the De Beers lab], and HRD.  We are the only family [lab] business that has made it to that level, but you realize at a certain time you need more.”

He predicts the new owner will keep operations as is.

“They like the team,” he says. “Most of the labs work very efficiently. We don’t know everything yet. It will take a little bit of time for us to get to know each other.

“They are very interested in education and improving the education of the consumer. They have plans in China and in the Far East. They will probably [expand] in that direction.”

For the time being, Jerry Ehrenwald, longtime director of the New York City office, will stay on board, Lorie says.

“Jerry is no longer a shareholder, but he is an important figure. It’s a little too early to see how things will change.”

IGI is considered the predominant grader of lab-grown diamonds, but Lorie says that is still a small part of its business. He notes that IGI grades more than 10,000 pieces of jewelry a day, but less than 1 percent of that is lab-grown.

“Synthetics come from a few suppliers, maybe seven or eight,” he says.

Still, he thinks it’s good IGI went into that business.

“We decided to certify whatever comes in,” he says. “If you can call it gem quality, it’s our job to certify it, not to give a judgment. Other labs hesitated, but we figured there is no reason not to do it. Why not?”

He believes that lab-grown diamonds may help save the industry.

“There was a [gap] between young people who could not buy diamonds. Diamonds are inaccessibly priced for 16- or 17-year-olds. A 16- or 17-year-old girl wears a lab-grown diamond on her finger. And maybe at 21 or 18, it will give her an appetite for the real thing.”

Lorie notes that IGI has pioneered many practices that are now standard in the industry, including establishing an international network of labs (particularly in India), grading jewelry, and co-branding reports. Today, it also offers screening of melee, education, and auditing and appraisals for banks and insurance companies.

And he believes this purchase shows confidence in the industry’s future.

“I come from Antwerp. When I talk with industry people, it’s always, the diamond business is going down. Consumers buy more diamonds today than 10 years ago. It’s the way they buy diamonds that has changed.”