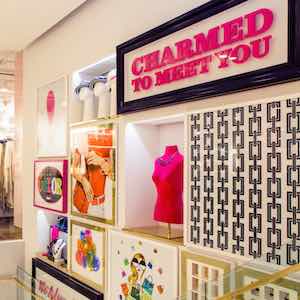 On July 11, the Houston-based retailer filed for Chapter 11 in Delaware court, its second filing in the past two years.

In a first-day declaration, senior vice president and chief financial officer Alvaro E. Bellon said that while the chain had spend the last few months pursuing strategic alternatives, “it became clear that there were no viable options to remain as a going concern.”

Charming Charlie had emerged from its first filing in 2017 with its hopes pinned on a “back to basics” business plan.

But Bellon said that a variety of macro factors made a comeback impossible, including “inclement weather disrupting the shopping experience in the first quarter of 2019, the implementation of the new tax laws that reduced consumer spending, and the general downturn in the retail industry…and the marked shift away from brick-and-mortar retail to online channels.”

The chain was also burdened by constricted access to credit, unprofitable inventory, and bad real estate terms. Tariffs on imports from China, where most of its products are made, further dented its profits, said Bellon. Its liquidity has been so constrained, said Bellon, that at the time of filing it had only $6,000 in cash on hand.

Founded in 2004 by Charles Chanaratsopon, who saw it as a way to fill out the shopping malls he was building, Charming Charlie offered accessories priced at $125 and below, with jewelry its biggest category. It targeted women ages 35–55 and saw itself filing the niche below department stores but above younger-skewing stores such as Claire’s.

“Merchandise is offered in as many as 26 different hues and arranged at each store according to the item’s color and theme, creating what has been referred to as a ‘treasure hunt’ experience,’ ” said Bellon. “Although this approach initially provided Charming Charlie with a strategic benefit, and engendered significant brand loyalty, it eventually caused Charming Charlie to be saddled with excess merchandise in underperforming color offerings.”

Even so, for most of the decade, the company saw explosive growth. In 2015, it boasted that it was opening 55 stores a year, expanding into Canada and the Philippines, and opening a three-level New York City flagship. Two years later, the chain reached 390 stores. That same year, it filed for Chapter 11, citing the tough retail environment, as well as “merchandising miscalculations, lack of inventory, [and] an overly broad vendor base.”

Bellon noted the prior management also made significant missteps, including reducing its workforce so drastically prefiling that it killed conversion rates.

“In at least one instance, competitors would come into Charming Charlie stores to recruit [its] employees, offering higher wages,” he said. “These workforce losses left the stores further understaffed.”

It emerged from Chapter 11 in April 2018, less than six months after its filing and after shutting more than 100 stores. In December 2018, it reshuffled its management. Now, 14 months later after it exited Chapter 11, it has found itself filing again, seemingly for the last time.

A spokesperson did not return a request for comment.