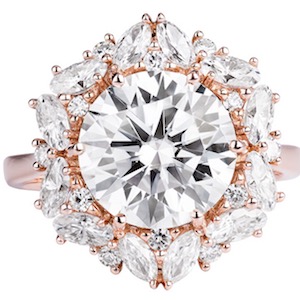 Charles & Colvard, the Morrisville, N.C.–based distributor for created moissanite, announced it had just posted its third consecutive profitable quarter, a change from a company that had generally posted losses for the last few years.

Particularly noteworthy was that sales at its e-commerce site climbed 55 percent. Its overall online sales number, which includes third-party marketplaces, increased 38 percent to $4.2 million, or 53 percent of total net sales for the quarter. Its traditional (non-online) sales stayed flat at $3.7 million.

She said the company was “very pleased” with sales at Helzberg Diamonds, as well as sales on Amazon, where its products are now being offered in an increased number of countries.

Miglucci said the company “wouldn’t say we are seeing cannibalization” of its legacy products from its new, more improved moissanite, noting that it pitches different products on different channels.

“ForeverOne is our premium product, and it commands a premium in its price,” she said. “We are selling it at more premium places, like Helzberg Diamonds stores.… [That customer] is not looking for a dialogue about the price point.

“However, the Moissanite by Charles & Colvard customer is looking for that dialogue. So that’s where the messaging might flip, and we talk a little bit more about the value story and we offer a price that is 30 percent below the ForeverOne pricing.… We really separate the channels out so we are meeting the right customer at the right price point with the right product.”

Its statement noted that it recently received the JCK Jewelers’ Choice Award for its signature halo hearts and arrows round statement ring (pictured) in the lab-grown gemstone jewelry category.