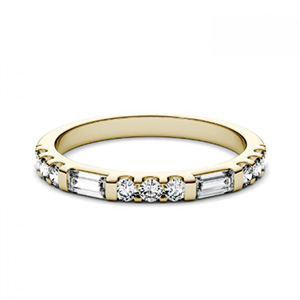 Miglucci also said in a statement, “With Flont’s monthly memberships and jewelry rental service, and the world’s most brilliant gem from Charles & Colvard, we are perfectly partnered to give consumers a way to touch, feel, and see the beauty of moissanite for themselves,” and added, “This model builds great brand awareness and loyalty for luxury and designer jewelry that anyone can obtain for job interviews and weddings and red carpet events and runways.”

Cormac Kinney, founder and CEO of Flont, said in a statement, “We’re thrilled to introduce our customers to Charles & Colvard and give them the opportunity to experience the brilliance of moissanite for themselves.”

Flont borrows from the Rent the Runway model of sending subscribers merchandise to try that they’re under no obligation to purchase. In February the company debuted a high-end membership tier, and opened a pop-up store in Los Angeles. And it’s been bulking up its collection of brands recently to include styles that encompass a variety of price points.

Charles & Colvard, which is based in Research Triangle Park, N.C., will clearly help fill a growing white space for well-priced but still high-end fine jewelry, as presumably identified by Flont.

At this year’s LUXURY at JCK Las Vegas show, Miglucci was bullish about the future of her brand, even when asked about the encroaching competition from lab-grown diamond jewelry brands, which offer similar product, often at only slightly higher prices. “I think lab-grown diamonds are great for us,” she said during the show. The lab market “adds a legitimacy to lab-grown gems of all types.”

Charles & Colvard has been busy rolling out several partnerships this past year, most of them in the philanthropic vein. The company currently partners with Leading Points, which provides programs for retailers to give back to over 30 million active and retired military personnel; the Brilliant Service program, which offers U.S. military members a special discount; and She Should Run, a non-partisan organization that strives to expand the talent pool of women running for public office.