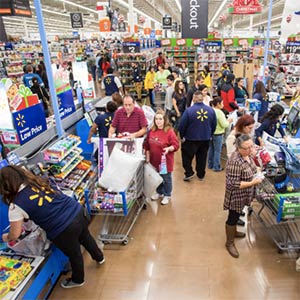 The cash register as we know it may soon be a relic of retail days gone by.

Following an industry-wide movement toward digital self-checkout systems, Walmart announced Tuesday it will be expanding its Scan & Go service—which allows shoppers to scan items as they stroll through the store, then check out through the store’s app—to another 100 locations in the U.S. The technology will be in around 200 Walmart stores by the end of 2018.

Apple stores put tablets into employees hands over a decade ago, altering the checkout experience forever.

But the personal scanner is employee-free and is poised to sweep big-box and grocery retailing in the coming years.

Amazon’s been testing a store in Seattle without checkout lines; dubbed Amazon Go, it’s currently for Amazon employees only, but the company plans for it to be open to the public. And Kroger’s new Scan, Bag, Go scanner program will be incorporated into 400 of the company’s stores later this year, according to CNBC.

Kroger’s tech is similar to Walmart’s in that it allows shoppers to scan items as they shop, but purchases still culminate at a checkout kiosk (Kroger told Business Insider that customers will eventually be able to pay through the store’s app).

The integration of scanner technology and other initiatives that reduce checkout friction is, at this point in retail’s timeline, crucial to survival for grocery stores and other mass retailers.

First off, retailers save significantly when the cashier pool dwindles to near nil. Additionally, consumers are becoming more comfortable with buying groceries and other necessities online. And their options for doing so, which include Instacart and Amazon Fresh, are growing.

Considering the high value of its merchandise, the consumer education component, and the crucial relationship-building that bolsters so many jewelry sales, maybe not.

But one thing’s certain—expediency and consumer autonomy are becoming increasingly important parts of the retail equation.

(Image: A Walmart checkout during Black Friday, courtesy of the company)