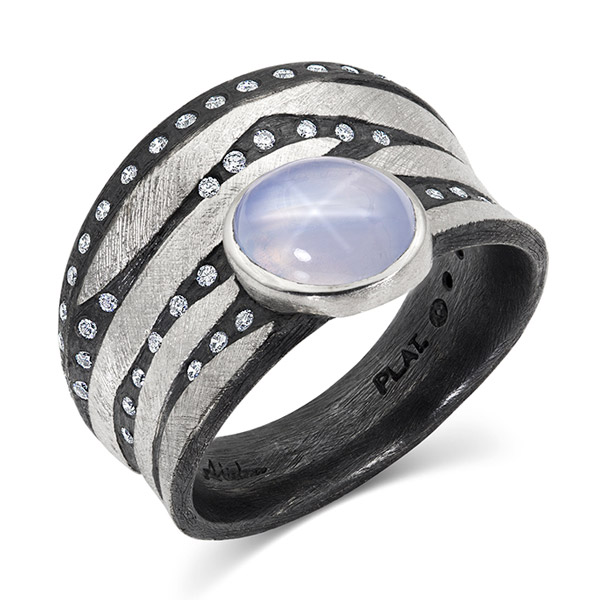 There’s nothing quite like the way a faceted gemstone sparkles when the light hits it—and it’s wonderful to see the way a lapidary artist can facet a stone—but a cabochon can be just as magical.

Among a sea of diamond statement necklaces, we saw that exemplified at the 2020 Golden Globe Awards. Zoey Deutch was a vision in a 58.69 ct. star sapphire by Harry Winston, while Cynthia Erivo wore a $3 million Bulgari necklace, at its centerpiece a 40 ct. cabochon sapphire. These were two very significant looks featuring the unfaceted cut, so I think that bodes pretty well for a spiked interest in cabochon.

It is the choice of a gemstone cutter to decide whether a stone will be faceted or get the smoothed-and-polished treatment, and, often, that depends on the stone’s position on the Mohs’ scale as well as its opacity. When I was green in this industry, I viewed this as some sort of rejection of the stone—it was not deemed good enough to sparkle via faceting and so it was relegated to exist as a cabochon. Womp, womp.

Much more experience and exposure to beautiful jewelry has proven that thought to be egregiously wrong. It’s true that a cabochon does not sparkle, but it does things that a faceted stone couldn’t come close to doing: It glows. A cabochon seems to contain a whole world of mystery and enchantment within its domed shape, a sight that can mesmerize as well as the most glittering of gems.

We probably take for granted how much we collectively love the cabochon cut, as it is seen so often in gems such as opal and moonstone, and so is a regular occurrence. But when a gemstone such as sapphire (which is no stranger to the cabochon form) knocks our socks off like it did on Sunday night, we’re reminded of how fantastic it is.

So here’s to seeing—and loving on—all of the cabochons we possibly can. There’s something about them that gives a piece of jewelry a little more heft, a candied appearance, as if sugary gumdrops have been frozen in form, infused with mystical powers. From opal to sapphire, emerald to tourmaline, amethyst to aquamarine—come one, come all. I want to see more, more, more!